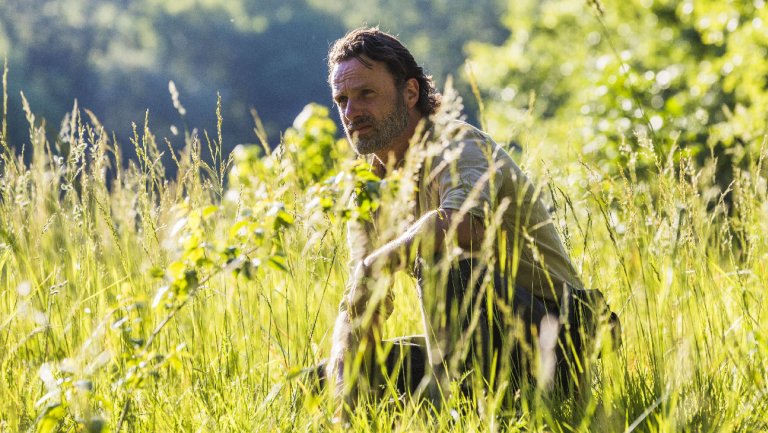 'Walking Dead' Teaser Strips Rick Down to Nothing

Plus, Negan and Eugene enjoy a meeting of the minds.

In the ongoing battle between boxers and briefs, there's no room for negotiation — at least not where the Garbage People and Rick Grimes (Andrew Lincoln) are concerned.

The preview for next week's episode of AMC's The Walking Dead, called "Time For After," features the leader of Alexandria stripped down to the essentials — essentially, his boxers and nothing else, as he's still a captive of Jadis (Pollyanna McIntosh) and the Heapsters, awaiting some form of violent justice.

Are we in for a rematch between Rick and Winslow, the armored walker who fought against our fearless Walking Dead hero (admittedly a confusing title as we're still getting used to Lennie James joining Fear the Walking Dead) in a junkyard gladiator arena of sorts? Does Jadis have a line on some other means of menacing Rick? Is she about to make good on the threat she issued in the season seven finale? It would certainly explain Rick's current attire.

Watch the preview for next week's episode in the video below:

Of course, the trailer for "Time For After" speaks toward much more than Rick's current predicament. There's a greater focus on what's happening within the Sanctuary, now that Negan (Jeffrey Dean Morgan) has fought his way out of being surrounded by walkers — only to be surrounded by more walkers, as the Saviors' compound remains on lockdown. There's no sign of Father Gabriel (Seth Gilliam), unfortunately, but the person last seen caring for the ill-fated priest stands front and center in a clip from the coming episode: Eugene (Josh McDermitt), on the receiving end of one of Negan's famous monologues.

"If things don't get fixed soon, a lot of people are going to die. My people," Negan tells Eugene in a private meeting. "Not me, of course. I'm living no matter what. I am too good at this shit. But others — and I can't have that. I don't want to see people get shot up and chewed up and chewing up the rest. I don't want to see you get eaten, Eugene! This place is about pooling and organizing strength. And you, my friend, are strong. That spongy organ between your eyes and your spectacular mullet is strong. I just want to make sure you know that I know that."

See how Eugene responds to Negan in the video below:

Is Eugene truly on the same page as Negan, or has the brainiest survivor in the Sanctuary finally caught on to what Dwight (Austin Amelio) has been planning with the Alexandrians? Is there still hope for this "stage two badass," as far as someday returning to the right side of the fight? We'll get the answer in the episode ahead, or at least something resembling clarity, based on the previews.