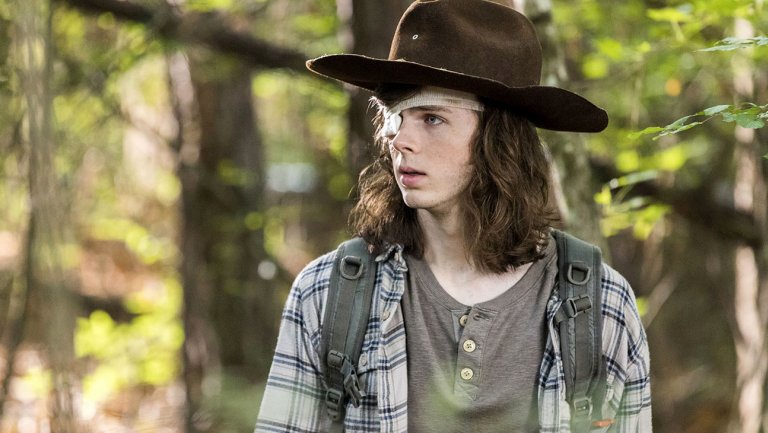 'Walking Dead': What Carl's Choice Means for the Future

Will the zombie drama hero's newest friend turn out to be a deadly foe?

[Warning: This story contains spoilers for season eight, episode six of AMC's The Walking Dead, called "The King, the Widow, and Rick," as well as major spoilers from the comic books on which the show is based.]

"You gotta do what's right. It's hard to know what that is sometimes — but sometimes, it's not."

And with that sage wisdom from the late Lori Grimes (Sarah Wayne Callies), alongside a much-needed supply of food and water, Carl Grimes (Chandler Riggs) has made his first new friend in the zombie apocalypse in quite some time — and it's someone familiar to comic book fans, if only in name.

Meet Siddiq, a newcomer to the world of The Walking Dead, at least as far as the television series goes. Played by Avi Nash, Siddiq was first encountered in the 100th episode of the series, the season eight premiere, attempting to make contact with Carl at a gas station. Almost instantly, Rick Grimes (Andrew Lincoln) appeared on the scene like an overprotective papa bear, firing warning shots into the air, a successful attempt to scare Siddiq away. But Carl didn't give up on the potential new ally, leaving supplies behind along with a friendly message, in case Siddiq was still out there.

Now we're past the note-trading stage, thanks to Sunday's sixth episode of the season. Midway through the hour, Carl encounters Siddiq once more, and this time, Rick is far from the action, tied up with the Heapsters. When they meet again, Carl asks Siddiq the classic three questions his people once used when recruiting newcomers in the prison days: how many walkers have you killed, how many people have you killed and why? Siddiq's answers ("237, give or take a couple," "one" and "the dead tried to kill him, but they didn't") are enough to pass muster, as Carl brings the young man into the fold, the two of them even battling a pack of walkers together.

"I'm responsible for you now. That's how it works," Carl tells Siddiq, who assures him that even though Rick wants nothing to do with the newcomer, "sometimes kids have to find their own way to show their parents the way."

It's interesting enough that Carl speaks to Siddiq as though he's a "kid," considering the character's roots in the Walking Dead source material. In the comic books from Robert Kirkman and Charlie Adlard, Siddiq is nearly 40 years old, originally hailing from Oceanside, before becoming one of the key members of the Alexandria Safe Zone construction crew.

Siddiq has little to do with Carl in the comics, but has ties to other familiar faces from the show: Rosita (Christian Serratos) and Eugene (Josh McDermitt), who become romantically linked to one another at some point during the time jump between the end of the war against the Saviors and the beginning of the war with the Whisperers, the new threat on the board once Negan (Jeffrey Dean Morgan) has been neutralized. Rosita is killed at the start of this conflict, and several issues later, Siddiq tearfully confesses to Eugene that he and Rosita were secretly in love; she was planning to leave Eugene before her death.

Will Siddiq and Rosita embark on a similar romance in the Walking Dead TV series — an ill-fated one, at that? It's certainly not impossible, but given the relatively significant shift from the character's first appearance in the comics, it's also possible that the Siddiq of the TV show isn't all that he says he is.

Is it possible that Siddiq is aligned with the Saviors, setting Carl up for a massive betrayal down the line? Given the red-eyed Rick glimpsed in the season premiere, Walking Dead fans should be on full alert for someone close to the Alexandrian leader to die — and Carl's death at Siddiq's hands, or some other method associated with Siddiq, would certainly be big enough to prompt Rick's words that speak to the season's theme: "Can my mercy prevail over my wrath?"

The tides of the war between the Alexandrians and the Saviors look likely to shift at least somewhat in the near future, given the potential germ warfare storyline being introduced with a very sick Father Gabriel (Seth Gilliam). With that in mind, Siddiq being a secret Savior wouldn't be too far outside the realm of possibility. In other words, Carl might be wise to keep an eye on his new friend in case he's an enemy — a daunting task, since Carl only has the one.

What do you make of Siddiq? Do you think he's as he appears, or is there another shoe that's still to drop with Carl's new friend? Let us know in the comments section below, and keep checking with THR.com/WalkingDead for further deep dives and theories all season long.