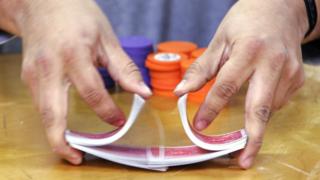 Police raiding a Berlin restaurant have discovered playing cards which had been laced with a radioactive substance.

Detectives believe players could wear a hidden detector on their bodies allowing them to recognise certain cards, giving them an advantage.

The scheme was discovered when a routine check at a waste treatment facility uncovered an increased level of radioactivity in a rubbish truck.

Police managed to trace the vehicle to a restaurant in Berlin.

On raiding it, they found 13 playing cards laced with iodine-125, a substance used in medicine that has a half-life of 60 days. That means it stays radioactive for longer than most other types of radioactive iodine.

It's not clear what type of game the cards were being used for. The venue was not authorised for gambling.

The German authorities ordered the area to be sealed and cleaned, and say that there is no wider risk of contamination.