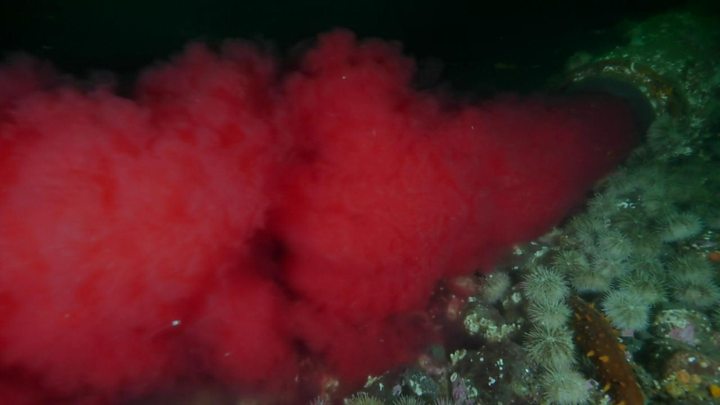 A Canadian fish processing plant is under scrutiny after footage was released showing bloody effluent being discharged into British Columbia's waters. The "very graphic" images have raised concerns the wastewater could spread disease to the province's Pacific wild salmon population.

A constant stream of billowing bright red liquid is seen rippling and mixing into the otherwise clear waters.

"I couldn't believe what I was seeing," says photographer Tavish Campbell who filmed the footage during underwater dives between Vancouver Island and the mainland.

"I was grossed out at the same time I was feeling mad," he says. "I was just in shock."

The plants process farmed Atlantic salmon that are raised in open-net farms in the region, a major centre for the province's aquaculture industry.

Biologist Alex Morton sent the samples Campbell collected for testing at the Atlantic Veterinary College at the University of Prince Edward Island.

Morton, a fierce opponent of the open-net fish farms in the province, says the results reveal another way that farmed salmon can transmit disease to their wild counterparts.

BC Environment Minister George Heyman calls the footage "very graphic" and says they are looking into the plant's permits and independently reviewing the effluent test results.

"We want to protect wild salmon, we want to ensure anything being discharged into the ocean is safe before it hits the water," he says.

PRV has been present in BC's industrial fish farms for years, and research suggests the virus might be a "causative agent" of heart and skeletal muscle inflammation (HSMI) disease.

HSMI is a concern for Norway's fish farms. The disease has been reported in Scotland, Chile and recently, Canada.

Morton claims "you couldn't do anything more dangerous" than allow the effluent to flow directly into the water.

"This looks like a fire hose of blood into the route where you know juvenile salmon leaving the rivers and adult salmon headed back to the river are going to pass through and come in contact with that pathogen," says Morton.

BC's salmon farms have faced accusations for years that they spread disease to the province's wild salmon.

About 90% of the aquaculture industry in BC is farm-raised salmon, with over 100 facilities mainly in the Campbell River, Port Hardy and Tofino areas.

The industry says strides have been made to drastically reduce the environmental impact of fish farms since they were first established around the 1990s.

A 2009 federal inquiry looking into the decline of BC's Fraser River sockeye salmon was concerned enough about the potential risk of disease transmission that it called for a freeze on new farms in the Discovery Islands until 2020, giving time for more research.

Federal studies are currently under way to investigate the impacts of pathogens from fish farms on migrating wild Pacific salmon.

The tested effluent in Campbell's footage comes from Brown's Bay Packing Company, which has been processing farmed salmon from the BC coast since 1989.

They process over 32m pounds of product each year in their Seymour Narrows facility.

General Manager Dave Stover tells the BBC that the fish processing effluent is treated, monitored and tested by an accredited lab in the area.

"All of our wastewater goes through a treatment system and is treated prior to discharge," he says.

Stover says the plant meets or exceeds all provincial, federal and third-party standards.

That includes the Global Aquaculture Alliance's policy for best practices, which requires plants to screen out solids and disinfect effluents to kill any disease organisms before release.

Jeremy Dunn, executive director of the BC Salmon Farmers Association, says that all BC plants processing farm-raised salmon treat effluent to a level higher than provincial standards before release.

"The treatment of water by a plant processing farm-raised salmon is the highest you're going to find in a seafood processing plant in BC, certainly higher than many of the plants that process wild salmon."

Heyman, the provincial minister, says inspectors will be sent to the Brown's Bay facility, which hasn't been inspected since 2013.

"This company and others are operating on permits and conditions that in some case are almost three decades old or older."

But there are no specific regulations under the federal Fisheries Act for effluent from fish processing plants, unlike for meat, potato and poultry industries.

The federal department of fisheries did not respond to request for comment.

Heyman says the province is looking at how other countries handle the effluent from fish processors.

For Campbell and other activists, though, the solution is clear – they want the open-net farms shuttered.

"The writing's on the wall and I think the industry is starting to realise what's happening," he says. "So anything short of that isn't going to be enough."