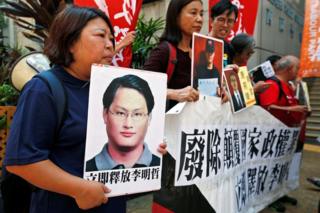 A Chinese court has sentenced a Taiwanese activist to five years in jail for "subverting state power".

His case has gripped Taiwan, which has called for Mr Lee's safe return, and has further strained the island's relations with China.

Taiwan's presidential office has criticised the sentence, saying: "We cannot accept this."

The case first caused a stir in March when the democracy and human rights activist mysteriously disappeared while travelling in mainland China.

Chinese authorities later confirmed they had detained him on suspicion of subversion.

Lee appeared in a court in Hunan province in September. He was accused of working with a Chinese national in circulating and writing comments that "attacked" the Chinese government and promoted "Western-style democracy" on social media and messaging platforms.

Mr Lee's family and colleagues say he did nothing wrong and only shared his experiences as an activist.

In a statement on Tuesday, the office of Taiwan's president Tsai Ing-wen reiterated her call for his release, and said it could not accept his sentencing as "the idea of spreading democracy is innocent".

"It is regrettable that the Lee Ming-che case has seriously damaged cross-strait relations and especially challenged Taiwanese people's persistence and ideals for democracy and freedom," the statement said.

Ties have soured between Taiwan and China since Ms Tsai, known for her pro-independence views, took power last year. Beijing considers Taiwan a breakaway province to be reunited with the mainland one day.

"Lee Ming-che should not have to spend a day in jail, since everything he did – peacefully discuss current events and historical issues on social media – is expressly protected under international law."