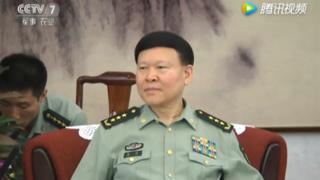 A former high-ranking Chinese military official has taken his own life, state media say, sparking a debate over the possible circumstances.

According to the official Xinhua news agency, Zhang Yang was found dead at his home last Thursday.

State media say he had been suspected of corruption and was being questioned by police prior to his death.

Media silence on his whereabouts since August had created intrigue in both Hong Kong's and social media.

China Daily had suddenly announced in August that a new figure would be appointed to his director of political work role.

Who was Zhang Yang?

Zhang had served as a general in the People's Liberation Army and was considered a key ally of President Xi Jinping, rising quickly through the ranks since Mr Xi took office in 2012.

Zhang had been a member of the Central Military Commission (CMC), the top-ranking military branch of the Communist Party government.

He was also a member of the Communist Party's Central Committee and served as director of the army's General Political Department, the administrative department that oversees the army's political activities.

What have media said on the disappearance?

Rumours circulated in late August that Zhang, along with another high-ranking official, Fang Fenghui, was being investigated in connection with President Xi's ongoing anti-corruption campaign.

Hong Kong's Ming Pao daily said in late August that the CMC was expected to undergo a "major personnel reshuffle" ahead of the October National Congress – China's most important political event when key changes to the country's leadership are announced.

A 23 August article in the paper said both men were "expected to be replaced". However, no mention of this was made in mainland media at the time and there has been no word on the men since early August.

Speculation intensified after neither man was listed in the military delegation at the congress.

In a 1 September report, Hong Kong's Sing Tao said both men had been detained "for alleged serious violation of discipline".

Sing Tao is a pro-Beijing paper and often carries coverage from mainland state media. However, there were no reports in Beijing media at the time.

Xinhua only mentioned on Monday that Zhang had been questioned by police in August and that he was "suspected of bribery and large-scale property crimes".

It added that he was being questioned in connection with the cases of Xu Caihou and Guo Boxiong, two former CMC generals who were investigated in March 2014 and July 2015.

Zhang's death has been a major talking point on Chinese social media, although many users expressed surprise they were freely able to comment, given its political sensitivity.

Many Sina Weibo users are asking why it took five days for official media to announce the death. One said: "[The government] needed to make sure all the major media had their manuscript ready in advance."

Some users expressed surprise he was able to take his own life, given he was being investigated.

One says, in a carefully worded Weibo post: "It's said it was suicide, but in fact…"

Another user says: "The dead cannot speak," and another that: "If he's dead, he can 'protect' more people."