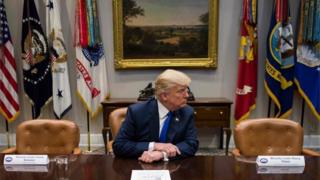 Democratic congressional leaders have cancelled a meeting with President Donald Trump after he attacked them on Twitter.

The Republican president said he did not think he could reach a deal with Nancy Pelosi and Chuck Schumer on funding the government.

The Democrats said they would negotiate with Republican lawmakers instead.

Averting a federal shutdown is just one of this month's big challenges for Republicans, who control Capitol Hill.

The party's lawmakers are also under pressure to pass a far-reaching tax plan that they can send to the president's desk by the end of the year.

The Republican tax bill cleared the Senate Budget Committee on Tuesday in a 12-11 vote along party lines, with a full vote by the chamber expected this week.

"I think we're going to get it passed," Mr Trump said of the bill on Tuesday afternoon after meeting lawmakers on Capitol Hill.

However, Congress must also agree a year-end spending package to keep the US government running beyond 8 December.

Democrats have suggested negotiations could hinge on saving an Obama-era programme that allowed undocumented immigrants who entered the US as children to stay.

"Problem is they want illegal immigrants flooding into our Country unchecked, are weak on Crime and want to substantially RAISE Taxes. I don't see a deal!"

House Democratic leader Nancy Pelosi and Chuck Schumer, who is her Senate equivalent, later issued a joint statement abruptly calling off the meeting.

Later on Tuesday the president told reporters of Mrs Pelosi and Mr Schumer: "They've been all talk and no action."

In mid-September Donald Trump and Democratic leaders Nancy Pelosi and Chuck Schumer seemed on the verge of establishing a functional working relationship. Over a Chinese dinner they, along with congressional Republicans, hammered out what appeared to be a framework for co-operation on budget and immigration issues.

The Democrats were satisfied. Mr Trump basked in media praise as a skilled negotiator.

Two months later, signs of a bipartisan thaw have given way to political winter.

Mr Trump, criticised by some of his most ardent supporters for those earlier overtures, tweet-slammed "Chuck and Nancy". The Democratic duo responded by turning their backs on the president and promising to only negotiate with Republicans in Congress – who, they believe, are more likely to stand by any agreement reached.

Both sides are playing to their political bases. A legislative train wreck in December – including a government shutdown, the loss of health insurance funds for poor children and the prospect of deportation for long-time undocumented immigrants – now appears increasingly likely.

This may turn out to be an art-of-the-deal style tightrope walk that has a successful resolution. The clock is ticking, however, and some very imposing deadlines loom.

"Given that the president doesn't see a deal between Democrats and the White House," they said, "we believe the best path forward is to continue negotiating with our Republican counterparts instead."

The White House said the move was "disappointing", but that the two Republican congressional leaders would attend the meeting as planned.

"The President's invitation to the Democrat leaders still stands and he encourages them to put aside their pettiness, stop the political grandstanding, show up and get to work," said the White House statement.

The Republicans said in a joint statement: "We have important work to do, and Democratic leaders have continually found new excuses not to meet with the administration to discuss these issues."