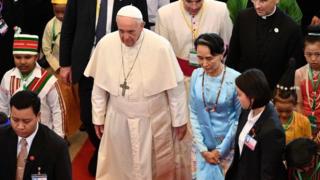 Pope Francis has delivered a keynote speech in Myanmar, saying its people "continue to suffer from civil conflict and hostilities" but without referring specifically to its Rohingya people.

Rights groups had urged the Pope to use the term to back the Muslim community.

However, the Catholic Church in the country had told him the term could cause difficulties for Catholics.

Myanmar has been accused of ethnic cleansing, with 620,000 Rohingya fleeing to Bangladesh since August.

The 80-year-old Pope is on the second day of a four-day visit to the country.

In an earlier 40-minute meeting in Yangon with leaders of the Buddhist, Islamic, Hindu, Jewish and Christian faiths, the Pope stressed that each religion had "its riches and traditions".

However, Vatican officials who gave a briefing on the meeting made no mention of any reference to the Rohingya.