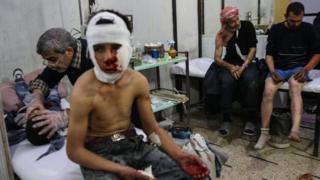 The Syrian government has accepted a Russian proposal for a ceasefire in the rebel-held Eastern Ghouta, on the outskirts of Damascus, the UN says.

Dozens of people have reportedly been killed in the past two weeks as the military intensified its bombardment.

Food shortages in the area, which has been besieged since 2013, have also led to many cases of severe malnutrition.

The ceasefire was announced as the latest round of UN-sponsored peace talks were due to start in Geneva.

Indirect negotiations on a political solution to the conflict were scheduled for Tuesday, but the government delegation will not now arrive until Wednesday.

Syrian media said the delegation delayed its departure because the opposition was still insisting President Bashar al-Assad stand down at the start of any transition.

The Eastern Ghouta, home to up to 400,000 people, is the last rebel stronghold close to Damascus.

Earlier this year, it was designated as one of four "de-escalation zones" agreed by the government's close allies, Russia and Iran, together with rebel-backer Turkey.

Despite that, the area has continued to come under bombardment. Troops and allied militiamen have also shut many of the routes used to smuggle in food and medicine, leaving residents dependent on irregular aid deliveries.

Two weeks ago, following a surprise ground offensive by jihadist rebels, pro-government forces stepped up their attacks on the Eastern Ghouta, reportedly with Russian air support.

Since then, at least 151 civilians have been killed by air strikes and shelling, according to the Syrian Observatory for Human Rights. The UK-based monitoring group said four people had died in the town of Hamouria on Tuesday.

Médecins Sans Frontières warned on Monday about the status of field hospitals it supported in the Eastern Ghouta, saying they were "stretched beyond their limits".

It said they had dealt with 576 wounded patients and 69 dead – a quarter of them women and children – and that the true figures were unquestionably higher.

The organisation added that a major field hospital in Kafr Batna was hit by two rockets on 20 November, seriously damaging hospital infrastructure and putting one ambulance out of service, while another two field hospitals and a clinic temporarily suspended non-emergency services between 15 and 18 November out of fear of exposing medics and patients to danger.

MSF said most facilities were in urgent need of fresh medical supplies, and warned that patients' lives would be at stake if they were not replenished.

On Tuesday, only hours before UN special envoy Staffan de Mistura announced that the government had agreed to a ceasefire in the Eastern Ghouta, a joint UN-Syrian Red Crescent convoy carrying food and medicine for 7,2000 people reached the town of Nashabieh.

A UN spokeswoman told AFP news agency that the delivery included nutrition items and medication to treat malnutrition, as well as medication for trauma treatments.