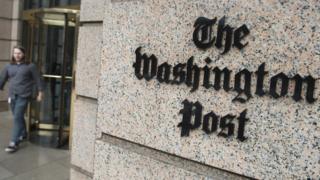 The Washington Post says it has uncovered a failed "sting operation" by a group trying to peddle a sensational but false story to its journalists.

A source told the newspaper she had been impregnated as a teenager by US politician Roy Moore.

The Post said its research debunked her story, and that she worked for a group called Project Veritas, which it said "targets the mainstream news media".

The group said the Washington Post was reporting "an imagined sting".

But in an email sent to US followers – including journalists – it admitted its "investigative journalist" had had their cover blown.

The Washington Post said it was originally approached by a woman the day after it published allegations that US Senate candidate Roy Moore had once initiated a sexual encounter with a 14-year-old girl.

Woman with anti-"liberal media" group reached out to me — posing as Roy Moore accuser. Instead of publishing fake story, @WashingtonPost busted her. https://t.co/y0ZmOFV6Qe

The woman, who used a fake name, claimed to have had a sexual relationship with Mr Moore when she was 15. "She said that she got pregnant, that Moore talked her into an abortion and that he drove her to Mississippi to get it," the newspaper said of the conversations.

Project Veritas has posted a series of tweets claiming to expose bias at the Washington Post. It claimed the newspaper was attempting to divert attention by inventing the "sting operation" story.

But many journalists on social media claimed the attempt to prove the Washington Post had published unverified claims had backfired – and showed the opposite.

Project Veritas paid someone to pretend she was raped to delegitimize real stories and all they did was prove @washingtonpost reporters should be trusted to do good reporting. Nice job guys.

Condolences to everyone at the @washingtonpost for losing Donald Trump’s Fake News Trophy today.

The Washington Post reporter conducted a series of interviews over two weeks with a woman who revealed her name as Jaime Phillips.

It said "she repeatedly pressed Post reporters to give their opinions on the effects that her claims could have on Moore's candidacy if she went public".

But the Post did not publish a story about the unsubstantiated claims.

Instead, it noted that Ms Phillips had said she lived in Alabama only for a summer while a teenager, but her phone number had an Alabama area code. It reported that it also could not verify her background story about where she worked.

According to the Post, researchers also found a fundraising page from a person with the same name who said they were moving to New York having "accepted a job to work in the conservative media movement to combat the lies and deceit of the liberal MSM [mainstream media]".

When conspiring to trick reporters, one should always clearly state their plans online. https://t.co/ff9HgFbrgn pic.twitter.com/xrgccMLCra

At the next meeting, the Post said its reporter confronted Ms Phillips about the possible links, and brought videographers, eventually telling her she was being recorded.

Ms Phillips told the Post she was not working with any organisation that targets journalists.

It reported that after several minutes Ms Phillips ended the conversation, and Post staffers then followed Ms Phillips to the offices of Project Veritas.

Project Veritas says its mission is to "investigate and expose corruption".

Its founder, James O'Keefe, has a criminal record for a previous "sting" in 2010, when he entered a senator's office in a federal building under a false identity. He was sentenced to three years' probation, a fine, and 100 hours of community service.

He said the "floundering" paper was "spending a tonne of time and money trying to turn the tables on Project Veritas, talking about an imagined sting".

The entire media establishment is against Project Veritas. Number one trending on Twitter. For good reason. There is a video coming out in momentarily inside the Washington Post. The last video cost NYT reporter his job. They are scared. As always, there’s more than one Video!

It's as if the blue checkmarks inside corporate media caught Jack the Ripper himself. Why does it stink so much like damage control? Maybe because there mention of Bezos on the hidden camera inside WaPo’s newsroom… Launch ETA in a matter of minutes.

Video footage, apparently shot by a hidden camera, appeared to show Post staff members question the criticism of the Trump administration by the newspaper's editorial board, and say the president boosts reader numbers.

Another video claimed to show a "confrontation" with a Post reporter outside the offices of Project Veritas, showing Mr O'Keefe chase down the reporter refusing to answer questions about the Project Veritas videos, which had not been released at the time.

The Washington Post uploaded its own, longer recording of the same encounter.

It showed reporter Aaron C Davis, who believed he was there for an arranged interview with Mr O'Keefe. When Mr O'Keefe did not answer questions about Ms Philips or possible connections with Mr Moore and the Republican party, Mr Davis announced he was leaving.

James O’Keefe tweeted about his 'confrontation' with a Post reporter. Here’s what really happened. https://t.co/RtLDDVJSuW

Dr Paul Lashmar, a journalism lecturer at London's City University with a background in investigative journalism, said both groups have a valid stance.

With its "clearly political rather than journalistic agenda", an organisation like Project Veritas is only beholden to its own ethical standards, he said, and for journalists, "it's a very useful process, to know there are people out there ready to embarrass you if you don't check out your story."

Equally, he thinks it is "perfectly reasonable" of the Washington Post to release the details of off-the-record conversations – so long as it is done with care.

But "if someone is trying to entrap you, then it removes any duty of protection for that source," he said.