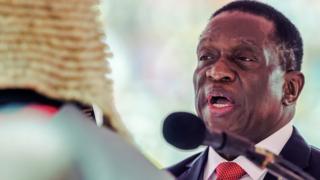 In a statement, he said the government will prosecute those who fail to comply when the amnesty ends in February.

"Such malpractices constitute a very serious economic crime against the people of Zimbabwe," Mr Mnangagwa said.

Since taking office last week, he has pledged to crack down on corruption.

"Huge sums of money and other assets" have been "illegally externalised by certain individuals and corporates," the president said in a statement.

"Those affected are thus encouraged to take advantage of the three-month moratorium to return the illegally externalised funds and assets in order to avoid the pain and ignominy of being visited by the long arm of the law," he added.

This is a general amnesty to all individuals and corporates, but Mnangagwa's reference to Operation Restore Legacy – the military operation that led to President Mugabe's resignation – appears to have specific public officials in mind.

The operation has already seen former finance minister Ignatius Chombo arrested and charged with corruption, charges his family says are "trumped up".

Since 2009, Zimbabwe has been using the US dollar as its main currency after abandoning its own local dollar.

The reserve bank says this has led to massive smuggling of the greenback to offshore accounts. It estimates that $2bn is illegally held in foreign bank accounts.

There is a shortage of cash in the country that has fuelled a black market trade, especially among importers looking for cash to import goods for resale.

The move to recoup lost public funds is seen as an attempt to boost Zimbabwe's ailing economy which is half the size it was at the turn of the millennium.

The economy has struggled since land reforms were introduced in 2000.

These reforms saw white-owned farms redistributed to landless black Zimbabweans – and those with good political connections – which led to sharp falls in production.

As Mr Mnangagwa was sworn in on Friday, he promised to tackle corruption, protect foreign investment and create jobs to help rebuild the economy.

"We must shed misbehaviours and acts of indiscipline which have characterised the past. Acts of corruption must stop," he said.

His departure followed a power struggle in which Mr Mnangagwa was sacked as vice-president to pave the way for Grace Mugabe, the then-first lady, to take up the presidency.

Mr Mnangagwa fled the country but returned to a hero's welcome and vowed to serve all citizens.

"I am required to serve our country as the president of all citizens regardless of colour, creed, religion, tribe, totem or political affiliation," he said.