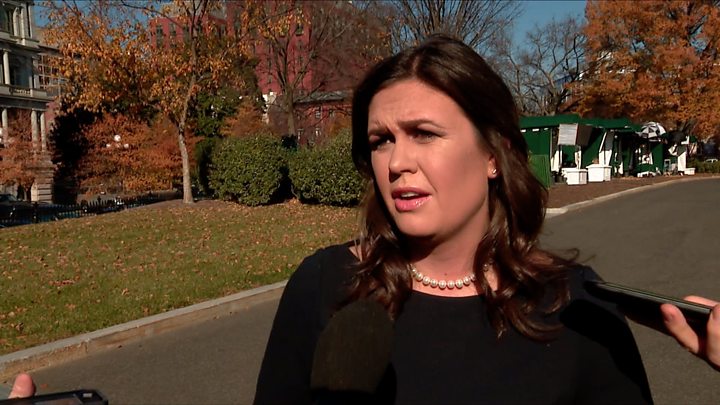 The first tweet from Jayda Fransen, the deputy leader of Britain First, claims to show a Muslim migrant attacking a man on crutches.

This was followed by two more videos of people Ms Fransen claims to be Muslim.

Responding to Mr Trump's posts, UK Prime Minister Theresa May's official spokesman said it was "wrong for the president to have done this".

White House spokeswoman Sarah Sanders said Mrs May and other world leaders knew that "these are real threats that we have to talk about".

"Whether it's a real video, the threat is real," she said.

The original video was shared by US conservative commentator Ann Coulter who Mr Trump follows.

What did Trump retweet?

The first video purportedly shows a "Muslim migrant" attacking a young Dutch man on crutches. However, the claim in this tweet appears to have little substance.

A spokesperson from the Dutch Public Prosecution Service told the BBC that the person arrested for the attack "was born and raised in the Netherlands" and was not a migrant, as claimed in the social media post.

The Netherlands Embassy in Washington DC confirmed this on Twitter.

[email protected] Facts do matter. The perpetrator of the violent act in this video was born and raised in the Netherlands. He received and completed his sentence under Dutch law.

The second video retweeted by Mr Trump shows a man smashing a statue of the Virgin Mary.

This video was uploaded to YouTube in 2013. The man in the clip says: "No-one but Allah will be worshipped in the land of the Levant," which could place him in Syria.

The third video originates from the riots that took place in Egypt in 2013, and shows a man being pushed from the top of a building in Alexandria. In 2015, those involved in the the incident were prosecuted, and one man was executed.

Read more about the videos here.

Who are Britain First?

Britain First was founded in 2011 by former members of the far-right British National Party (BNP). The group has grabbed attention on social media with controversial posts about what they deem "the Islamification of the UK".

It has put up members to run in European elections and by-elections on anti-immigration and anti-abortion policies, but has not secured any seats.

It also contested the most recent London mayoral election, receiving 1.2% of the vote.

But its social media strategy has made it much more successful online than at the ballot box. The party has nearly 2 million likes on Facebook – dwarfing the main UK political parties.

Ms Fransen, the group's deputy leader, has been charged with using "threatening, abusive or insulting words or behaviour" during speeches she made in Belfast.

She will appear at Belfast Magistrates' Court on Thursday 14 December.

You can read more about Britain First here.

Why does it matter?

Donald Trump is once again using Twitter to weigh in on contentious religious-tinged political issues in the UK.

In the past, he's attacked London Mayor Sadiq Khan for mishandling a militant attack just hours after it occurred. He misattributed a rise in crime in England and Wales to the "spread of radical Islamic terror". Now, he has retweeted a series of unverified videos posted by a far-right British nationalist group.

For the president, directing attention toward the UK seems to serve a domestic political purpose.

He cites events and opinions there as a warning to Americans of what could happen in the US if they do not heed his policy prescriptions on immigration and border security. The Muslim ban, the US-Mexico wall, increased deportations, the sharp reductions on refugee resettlement – it's all part of the president's "national security" package.

While most Americans probably haven't heard of Britain First and are unfamiliar with European radical nationalist movements, there are white supremacist groups in the US that follow the actions of these overseas operations quite closely. The president on Wednesday signalled that he watches them too.

Mr Trump's decision to retweet the videos met with dismay on social media.

Brendan Cox, whose wife, British MP Jo Cox, was murdered by a right-wing extremist who shouted "Britain First" before committing the act, has condemned the action.

Trump has legitimised the far right in his own country, now he’s trying to do it in ours. Spreading hatred has consequences & the President should be ashamed of himself.

TV presenter and journalist Piers Morgan, who has called himself a "friend" of the president, tweeted: "What the hell are you doing?"

"Please STOP this madness & undo your retweets," he said.

The Council on American-Islamic Relations, a US-based civil rights group, said: "These are actions one would expect to see on virulent anti-Muslim hate sites, not on the Twitter feed of the president of the United States."

"Trump's posts amount to incitement to violence against American Muslims," they added.

The head of the Anti-Defamation League (ADL), an anti-bigotry group, said the president's retweets would "embolden bigots in the US and abroad".

(2/2) We have seen a clear line from advocating intolerant ideas to pushing out prejudiced memes to introducing anti-immigrant & anti-Muslim policies like #TravelBan. We stand with the Muslim community and with all those condemning this shameful message.

The Muslim Council for Britain called on the UK government to "distance" itself from the comments.

"This is the clearest endorsement yet from the US president of the far-right and their vile anti-Muslim propaganda," a spokeswoman said.