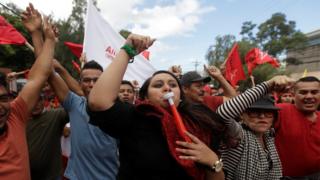 Thousands of people in Honduras have protested in the streets, accusing the authorities of fraud in a presidential election.

His clear lead in Sunday's polls shrank dramatically during the count.

The US state department has urged the authorities in Honduras to review the election results quickly.

Mr Nasralla had been five points ahead of the incumbent, Juan Orlando Hernández, on Monday when the court stopped updating its website.

When it resumed the following afternoon, that advantage disappeared rapidly and Mr Nasralla is now leading by less than one percentage point.

The opposition, and international observers, have been suspicious of the slow pace of counting in a country of fewer than 10 million people. But the authorities said the slow pace was down to votes from remote rural areas taking relatively long to arrive at the counting centre.

Mr Hernández said he was sure the votes from rural areas would be for him, a factor in why both candidates claimed victory the day after the election.

On Tuesday evening Mr Nasralla asked his supporters to protest on his behalf in Tegucigalpa, the country's capital city.

"I'm not going to tolerate this and there are no reliable institutions in Honduras to defend us."