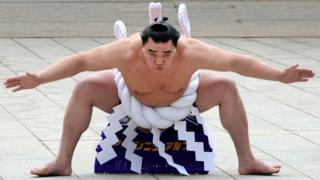 Sumo grand champion Harumafuji has said he will retire from the sport, in a scandal that has rocked Japan's highly ceremonial sport.

Harumafuji is being investigated for an alleged assault on a junior wrestler.

He said he "apologised from [his] heart" to his fans, the governing sports body and his wife "for causing such trouble".

The Mongolian wrestler started his career in Japan at the age of 16 and was promoted to grand champion or yokozuna – sumo's highest rank – in 2012.

"As yokozuna I feel responsible for injuring Takanoiwa and so will retire from today," the grand champion told a press conference on Wednesday.

He did not give any details about the incident which is still under investigation by the Japan Sumo Association (JSA).

According to media reports, the fight occurred when the star got angry because his younger colleague was checking his smartphone.

Takanoiwa had to be hospitalised after suffering a concussion and a fractured skull base in the incident, local media reported.

"I had heard that he was lacking in manners and civility and thought it was my duty as a senior wrestler to correct and teach him," Harumafuji said on Wednesday. "But I went too far."

A JSA spokesperson said Harumafuji's coach Isegahama had told the JSA earlier on Wednesday of the wrestler's decision to quit.

At a press conference on Monday, a speaker for an advisory body to the JSA had said the case required "extremely harsh punishment" but that no final decision had been made yet.

"There is almost no doubting that an act of violence was carried out," he said.

The incident follows a string of similar scandals and reports of violence.

Thirteen senior wrestlers were implicated in a match fixing scandal in 2011 while a year earlier, the sport was rocked by alleged links between sumo wrestlers and the mafia-like yakuza crime syndicates.

Another Mongolian grand champion retired from the sport in 2010 after reports of his involvement in a drunken brawl.

In 2007, a teenage novice died after he was beaten up by older wrestlers in a case exposing a culture of bullying and hazing within the traditional sport's strict hierarchy.

IcetruckNovember 29, 2017
Like story:
tweet
A look at the UK citizenship test Meghan Markle will have to pass
Pope in Myanmar preaches forgiveness, healing of old wounds