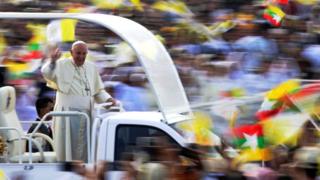 Some 150,000 followers attended the Mass in the city of Yangon.

Francis referred to the "wounds of violence" from ethnic conflict but urged people to shun revenge, saying it was "not the way of Jesus".

He again avoided the term Rohingya, the Muslim community of whom 620,000 people have fled to Bangladesh since August.

The UN has described the crackdown on the community in the state of Rakhine as "textbook ethnic cleansing".

It also denies the accusations of ethnic cleansing and says the crackdown was to root out violent insurgents after deadly attacks on police posts by Rohingya militants.

Pope Francis had been warned by his Catholic representatives in the country not to use the sensitive term Rohingya for fear of alienating the Buddhist majority and causing difficulties for the nation's 600,000 Catholics.

In his homily on Wednesday, Francis referred to the ethnic discrimination and conflicts that Myanmar has seen for decades.

He said: "I know that many in Myanmar bear the wounds of violence, wounds both visible and invisible.

"We may think that healing can come from anger and revenge. Yet the way of revenge is not the way of Jesus."

About 90% of Myanmar's Catholics come from ethnic minority groups and tens of thousands of devotees had travelled long distances to attend the Mass at Yangon's Kyaikkasan Ground park.

Francis toured the venue in his open-sided "Popemobile", waving to the crowds. A rank of nuns sang in Latin.

Meo, an 81-year-old devotee from the Akha minority in Shan state, told the AFP news agency: "I never dreamed I would see him in my lifetime."

Bo Khin, 45, a teacher who had travelled from Mandalay, told Reuters: "We may never get such a chance again. The Pope lives in Rome and we can't afford to go there. We feel very happy, joyful that he visited us in Myanmar."

But he was criticised by human rights groups for not mentioning the Rohingya directly.

Phil Robertson, the deputy director of Human Rights Watch's Asia division, said: "The Pope missed an important opportunity to speak truth to power, and publicly refute the unconscionable pressure by Aung San Suu Kyi and the Myanmar military to deny the Rohingya their identity."

Later on Wednesday, the third day of his four-day visit, the Pope met monks from Myanmar's highest Buddhist order, the Sangha Maha Nayka.

"If we are to be united, as is our purpose, we need to surmount all forms of misunderstanding, intolerance, prejudice and hatred," the Pope told them.

Some radical monks have been accused of inciting violence against the Rohingya.

Welcoming the Pope, Sangha chairman, Kumarabhivamsa, condemned "extremism and terrorism" carried out in the name of religion.

After Myanmar, Francis will move on to Bangladesh, where he will meet a small group of Rohingya refugees in a symbolic gesture.