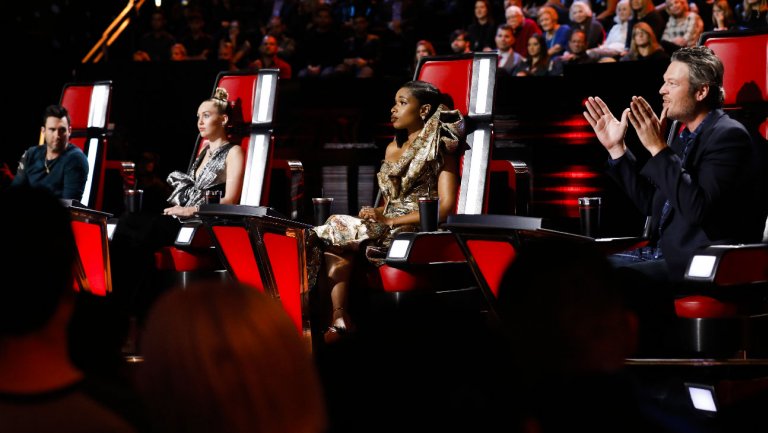 Two artists sang for the instant save.

The top 10 artists of season 13 were announced on NBC's The Voice on Tuesday night. After Monday night’s top 11 performances, nine artists were automatically voted through to next week, and the bottom two artists had to sing for the instant save. Coaches Blake Shelton, Adam Levine, Miley Cyrus and Jennifer Hudson awaited their artists’ fates in the live results show.

The first artists voted through to the top 10 were Team Blake’s Chloe Kohanski and Team Adam’s Addison Agen. Kohanski in particular had a standout performance on Monday night. Both artists broke into the iTunes charts, which gives contestants a significant boost when it comes to voting.

Team Miley then took the stage to sing “Man, I Feel Like a Woman” by Shania Twain to honor Cyrus’ girl power philosophy this season. Team Miley got some good news after the performance, as Brooke Simpson advanced to the top 10. Team JHud’s Davon Fleming was also voted through.

Team Adam, which lost an artist last week, took the stage for a performance of Fleetwood Mac’s “Go Your Own Way.” Carson Daly then brought out the artists for more results. America voted to save Team Blake’s Red Marlow and Team JHud’s Noah Mac.

Shelton sang his new single “I’ll Name the Dogs,” and Hudson joined him onstage to sing with him.

Team Miley’s Ashland Craft, Team Jennifer’s Shi’Ann Jones and Team Blake’s Keisha Renee were the last artists to automatically advance to the top 10. That left Team Miley’s Janice Freeman to sing for the instant save along with Team Adam’s Adam Cunningham, who was also in the bottom two last week.

Cunningham, no stranger to this high-pressure situation, gave a confident performance of “Amazed” by Lonestar. If he was nervous about being in the bottom two for a second time, it didn’t show. Levine said it was a personal-best performance. Freeman sang “Chandelier” by Sia, which was a bold song choice, and she delivered. Singing big songs is the way to go for these instant saves. Freeman showcased her powerhouse voice and also put on a good show. The results were shocking. Cunningham secured the save once again, and Freeman went home despite being one of the stronger voices in the competition.

IcetruckNovember 29, 2017
Like story:
tweet
Bitcoin crosses $10,000 milestone
Researchers Reveal 4 Things Most People Think About When They Wake Up