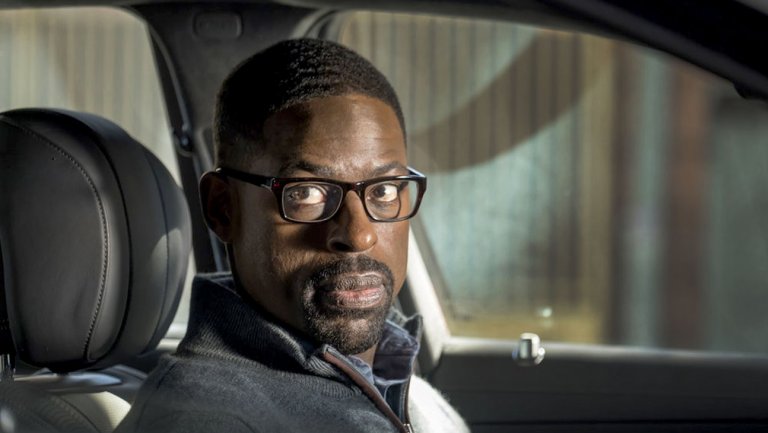 'This Is Us' Star Sterling K. Brown Opens Up About Racial Identity and Adoption

The actor talks with THR about Randall's relationship with his adoptive family, trying to adopt a child himself and what to expect from the show's big Super Bowl episode when the NBC hit returns in 2018.

[Warning: This story contains spoilers from the "Number Three" episode of NBC's This Is Us.]

Ultimately, Randall and his wife Beth (Susan Kelechi Watson) decided to let their foster daughter reunite with her birth mother. Instead, the couple decides to welcome another child into their home — maybe a boy this time. Tuesday's hour also united all three storylines: Kevin's (Justin Hartley) addiction struggles, Kate's (Chrissy Metz) miscarriage and Randall's adoption. Kevin initially sought help from his brother but left after finding out about Kate's miscarriage. Unfortunately, he left with one of Randall's daughters in the car, and was pulled over for a DUI.

Brown spoke with THR about his big episode, Randall's relationship with his parents (Mandy Moore and Milo Ventimiglia) and what to expect when the show returns from its winter hiatus.

In season one, Randall had an emotional breakdown and seemed to be the most fragile sibling. But in this run of episodes, he seems the most stable.

It's funny, Kate had a comment I think in 206, when Tess was born, and she's like, 'Yo, Randall has got his shit together. We're probably about five years behind. We're just waiting to catch up to him.' I was talking to Mandy about the nature of the relationship in the past with Randall and his mother and father. While he is adopted and while he's African-American, he always feels a bit on the outside of things [but] his parents really do make sure that he gets the attention that he needs from them.

You have Kate, keeping things away from Rebecca in terms of auditioning for Berklee, and then you have Kevin who is very cocksure of himself until he is dealt this devastating blow to his knee, but Randall is, throughout time, this stabilizing factor. His father's counting on him to go to Harvard. The [loops] that he throws you for aren't ones of indolence but of like, 'Well, maybe I want to go to Howard instead of Harvard,' and that's something that they have to adjust to as parents. He is constantly in search of where he fits into the grand puzzle of life. He's still doing that now as a foster parent and he's not in crisis, but he's definitely still searching for what side of this argument does he belong to.

It took him a little while to come to the decision to not fight his foster daughter, Deja (Lyric Ross), reuniting with her birth mother.

He has empathy for his mother and father, who took him in, and he has empathy for William, who let him go. He's able to understand both sides of an equation and ultimately able to respect Shauna's desire to be reunited with her child. It's not an easy thing for him to do, but it's the right thing in his opinion for him to do, because who is he to come in between a parent and their child? When he has that conversation with William, William says, 'Who am I to come into this family and break it up at this particular time?' He's thoughtful. He gets worked up when Shauna pops up on his yard, he's frustrated, he's annoyed, he wants to impulsively protect his children — Deja being one of his children — but then once he's able to breathe and take a step back he tries to do the right thing. The one thing that I can always say about Randall is that he really, really tries to do the right thing.

In the episode, teen Randall visits Howard University and seems to find a place where he belongs for the first time. What does that mean for Randall in all eras of his life?

Susan Kelechi actually attended Howard University, so she was very excited to see her alma mater portrayed on our show. Howard University was one of the schools that I applied to when I was going to college and I remember visiting the campus. I remember it like yesterday, and so Niles [Fitch, who plays teen Randall] did something in the episode when he saw a young lady walk by and his jaw literally slammed to the ground. I went to St. Louis Country Day High School … where I was one of the handful of black dudes in class. I remember thinking I didn't want to duplicate that high school experience in college, I wanted something different and I was yearning to be surrounded by more faces that looked like my own.

When I went to Howard I felt two things. I felt like, wow, what an amazing feeling to not be the minority, and to know there's probably just as many kids who came from predominantly white schools as I did so it wasn't a situation where I had to be like, well maybe no one will like me. What I love about [Randall] and what Niles does and what I do and what Lonnie [Chavis, who plays young Randall] does, is that we don't have to be — I can be dorky. I say corny things quite frequently, but it's apparent he's still rooted in his culture. His life, his wife, his experience has led him to a knowledge of his people and a pride for blackness. I think that that is something that young Randall is discovering and being on that campus may have been one of the beginning processes for him to have that experience of pride for his culture.

What can you say about Randall and Beth's continued quest to adopt or foster a child?

There's someone on the horizon. We know that they are open to the possibility of having another child in their lives and Randall, in particular, is eager for the possibility of a boy, just because he's surrounded by estrogen and a little bit of testosterone never hurt anybody.

Randall and Kevin have had a fraught relationship, but Kevin helped Randall through his breakdown. Will Randall be able to help Kevin through his?

When we come back from the break, we will be addressing something very direct to that question. It as been an up and down relationship. I feel like they've been on solid ground, but the fact that he would come into his home drunk in the middle of the day, take off, not be aware enough to know whether or not his daughter was in the car. When you mess with people's children, that's when most gentility tends to go out of the window and we'll see Randall trying to fight to maintain some sort of gentility toward his brother. It was a deeply upsetting thing and as a parent of two, just don't mess with my kids. You can say and do a lot of things to me, but when it comes to my children and their safety, that's a hard pill to swallow, so there will be something to work through.

What about Randall's relationship with Kate?

I have been eager and speaking to the writers about exploring their relationship in present day, because we see bits of their interaction in the past and they love each other, clearly. Kate has been based on the West Coast, Randall's been based on the East Coast and they've only got a chance to visit each other fleetingly. The first real scene that we had … was when we shared a moment regarding our grief for the loss of our father and the loss of William. I want to see more. I feel like there's something to be explored. I feel like the fact that she calls Kevin to tell him about pregnancy and she calls Kevin to tell him about the miscarriage but she doesn't call Randall immediately [implies] it may go Kevin then mom then Randall. As the non-twin adoptee, I do feel a bit on the outside of that relationship and I think it's fertile soil to be explored in the back half of the season.

The first season showed a lot of Randall bonding with William, but this episode had a scene where teen Randall bonded with Jack when he opened up about his experience in Vietnam. What can you say about that insight into Randall and Jack's relationship?

I love that moment. The whole idea of Jack being able to understand what it's like to be an outsider by virtue of being a vet was powerful. I mean, it's not an exact analogous situation, but he says, 'You go back and forth between feeling like you fit and you don't and that's the dance. That's what life is, finding your place and losing it and coming back to it over and over again.' Jack, I think, is a great father. He's a father and a husband first and foremost before anything about himself. … He is just so present for all of his children when he needs to be there for them. The moment that he has with Kevin after he tears his knee, even when he confides in Kate about his addiction to alcohol, and now he has this beautiful moment with his son. We've seen moments like this before, not with Niles, but with Lonnie, when young Randall was pretending that he didn't know math and his father had to sit him down and say, 'Why are you acting like you can't do this? You know that you can.'

Now, him being the fish out of water and feeling like his son was ashamed of him and his son was like, 'Dad, that's the last thing that could ever be true. I may be a little skittish, but it's just because every other teenage kid, I don't want to be around old people.' Then it opened up the door for this wonderful conversation, 'The way that you felt is … how I feel most of the time.' I really applaud the show and their exploration of this very unique relationship of a black boy being raised by these white parents and how they're learning about each other and they're learning about race from one another. No one assumes to be the authority on anything, but that there's a mutual excavation of what this all means. I love the writers room. I love the level of detail and thoughtfulness that they put behind each and every word. When I watch those scenes, I'm not in them, but I am in them because they inform me about the journey that this person has gone through to become who he is today.

Obviously Randall and Beth will continue their adoption going forward, but what else can you tease about the upcoming episodes?

Right now we are shooting episode 214, our Super Bowl episode. It is highly confidential. We have no sides on set. We've been instructed as a cast to bring our scripts to set and then don't let them out of our sights. It is written by [showrunner/series creator] Dan Fogelman. It is the best episode of the season. I can't wait for everyone to see it because it's probably one of the most cinematic pieces of television that I've ever read. I think Dan Fogelman wrote an hourlong movie for NBC and I think he's going to win some stuff for it.