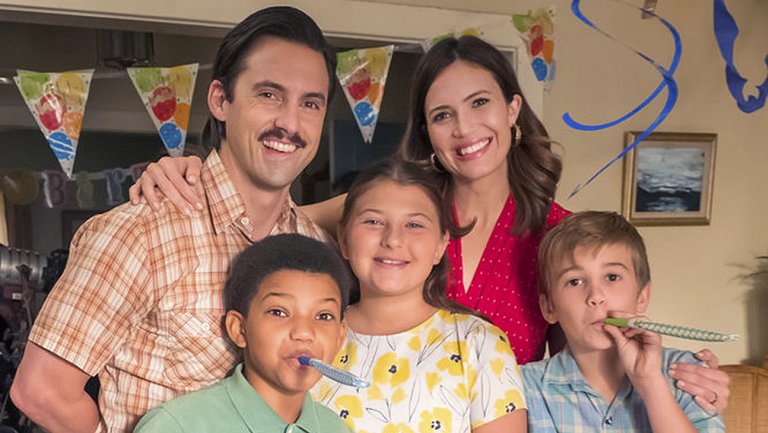 Executive producers Isaac Aptaker and Elizabeth Berger talk with THR about the Big Three trilogy of episodes, hope for the Pearson family and more clues to Jack's death when the NBC drama returns from its winter break.

[Warning: This story contains spoilers from the "Number Three" episode of NBC's This Is Us.]

This Is Us wrapped its fall run with a three-part trilogy of single-character-focused episodes, culminating in Tuesday's Randall-centric "Number Three." Executive producers Isaac Aptaker and Elizabeth Berger, who are co-showrunners alongside creator Dan Fogelman, told The Hollywood Reporter that when the show returns in January, it will bring the Pearson family together in unexpected permutations.

"What we thought was so cool about these is that really gave us a chance to explore each of the big three independently and really do a deep dive into their characters in a way that we just can't do when you're sharing a 42-minute episode across four storylines," Aptaker says of the Rashomon-style trio, which told the story of a single day from each sibling's point of view. "But, at the same time, we always love writing our characters together and really seeing them interact. So when we come back for the second half of our season, we got to do a lot more pairings that we haven't had a chance to do the last few weeks. … We're doing a lot more throwing all of our cast together, which is always so much fun to write and then they have so much fun shooting it."

There's plenty of material to mine, considering Kevin (Justin Hartley) is grappling with a pill and booze addiction (and now a DUI arrest with one of Randall's daughters in the car), Kate (Chrissy Metz) is coping with a miscarriage and Randall (Sterling K. Brown) and wife Beth (Susan Kelechi Watson) had to part with foster daughter Deja (Lyric Ross), who returned to live with her birth mother. Kevin and Kate's crises, in particular, were both meticulously planned.

"It wasn't like we decided halfway through that it was going to be a miscarriage," Aptaker said. "This was always going to be a story of a couple rising above this really, really tragic day and tragic event in their lives. We do have a bigger plan for Kate and Toby (Chris Sullivan) that isn't just sad. Their first experience with pregnancy was tragic, but we're optimistic and hopeful that there will be a happier ending in the long term for them."

And since Kate and Kevin both going through major life emergencies at the same time, they will be able to heal together and their twin bond will grow even stronger.

"We loved the idea of having the two of them going through their separate crises, and then bringing them back together in the back half of our season to that place where they're as close as ever," said Berger.

As for Randall, "Last season was all about Randall realizing that Rebecca (Mandy Moore) kept him from his biological father. And now there's this very strange role reversal that's happened, where all of a sudden he's the one trying to keep Deja from her biological mother," said Aptaker. "And that's what the memory he has on Thanksgiving and the story William (Ron Cephas Jones) tells him is really about for us — Randall realizing he's in Rebecca's shoes a little bit, he's in William's shoes a little bit, he's really having to draw on all of his experiences and his story from last year to figure out what's the right answer here."

Added Berger, "I think so much of what drives Randall is trying to fulfill the legacy of these two incredible fathers that he was gifted with. And I think we'll see going forward that if it's not Deja who's going to teach that energy and going to channel it in the next thing, [it will be someone else]."

At the end of Randall's hour, a short scene introduced a little boy searching for a foster family — which Aptaker and Berger said they included to provide a little bit of hope for the audience.

"We wanted to make sure that the episode had a hope to it, because these three together have a bit of an unrelenting sadness to them in a way, although I think Kate's is hopeful too," said Aptaker. "That is showing that there's someone out there who could quite potentially be the one that ends up in Randall and Beth's house permanently."

When This Is Us returns in January, the flashbacks will jump further back to the 9- and 10-year-old characters (a lighter, more fun episode set in the summertime) before heading back into the angsty teen years and addressing the big three's present-day drama.

"It's going to be combinations of our characters coming back together in a way that will hopefully feel very satisfying because they've been so wrapped up in their own things and because they've been missing all of these little clues of what's going on with the other ones," said Berger. "I think, especially with Kevin and Kate, these two really pride each other on picking up the small little clues, or sniffing out what's going on with their sibling. We're going to see these two grappling with, 'Oh my god, how could have I missed this?' I think all of our characters, to a certain extent, are going to be feeling that way and trying to right whatever wrongs they feel like they've committed over the last couple months."

Added Aptaker, "[We] come back in and deal with the thought of that arrest and what it does to the family. All of our present-day cast are playing in the same story and do a really, really cool special episode where they really get into some of their family dynamics and get to play off each other. It was very exciting to watch. That's always fun for us, because it's such a big cast and everyone is so, so strong, acting-wise, that whenever we can pair people together who haven't gotten to do a story together, it's just so much fun."

"In Kevin's episode, we see how he breaks his leg. So we're advancing the timeline and we are approaching the [death]," said Aptaker. "We now have the do and we have the leg in the cast. The last element that needs to fall into place before we can reach that day is Randall meeting the girlfriend that we see in 201. If you're keeping track, we're definitely quickly approaching the time of his death."