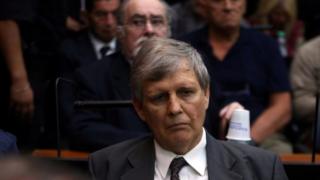 Two former navy officers in Argentina have been sentenced to life for crimes against humanity committed between 1976 and 1983 under military rule.

Captains Alfredo Astiz and Jorge Eduardo Acosta were found guilty of involvement in the torture and murder of hundreds of political opponents.

They are among 54 people who faced trial for crimes committed at the Naval Mechanical School, or Esma.

Astiz, known as the "angel of death", has refused to apologise.

"The human rights organisations are groups of vengeance and persecution," he said during the trial. "I will never ask for forgiveness."

Both Astiz and Acosta, known as "the tiger", were already sentenced to life in prison in 2011 for other counts of torture, murder and forced disappearance.

Out of the 54 people indicted, 29 were sentenced on Wednesday to life in prison; 19 were given sentences ranging from eight to 25 years in jail; and six were acquitted.

"This is much more than we expected," said Miriam Lewin, who survived Esma, a well-known Buenos Aires navy school that was used as a clandestine torture centre.

She followed the sentencing with hundreds of activists and relatives of the victims outside the court building.

An estimated 30,000 people were killed after a military junta led by General Jorge Rafael Videla seized power in 1976 vowing to rid the country of the threat of communism.

During the seven-year campaign of terror, left-wing activists as well as ordinary citizens were illegally detained and killed.

They were taken to secret torture and killing centres set up by the military during what became known as the "Dirty War".

About 5,000 prisoners are estimated to have been taken there and 90% did not come out alive.

Some were killed by firing squad while others were thrown from planes – drugged but still alive – into the Atlantic Ocean.

The current trial opened in 2012, focusing on crimes committed at Esma against 789 victims.

More than 60 people were indicted, but that number was reduced to 54 after some of the accused died or were judged too ill to face trial.