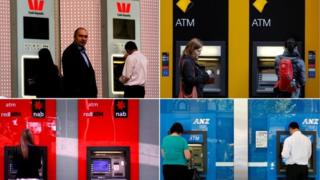 Australia will hold a royal commission inquiry into its banking and financial sector, the government has announced.

Australian banks have been embroiled in scandals in recent times.

Mr Turnbull had resisted calls for a royal commission for more than a year, but faced mounting pressure from other parties and members of his government.

"The only way we can give all Australians a greater degree of assurance is a royal commission into misconduct into the financial services industry," he said.

He said the "regrettable but necessary" decision would also help the nation's economy by restoring confidence.

The royal commission will cover the entire financial industry, including superannuation providers, insurers and financial advisers.

Australian banks have faced various allegations of misconduct in recent years, including over financial planning, rate-rigging and insurance fraud.

In August, the nation's largest lender, Commonwealth Bank, was accused of "serious and systemic" breaches of anti-money laundering laws.

Earlier on Thursday, the heads of the four largest banks – Commonwealth Bank, NAB, ANZ and Westpac – co-signed a letter in which they reversed their long-held opposition to an inquiry.

"Our banks have consistently argued the view that further inquiries into the sector, including a royal commission, are unwarranted," the letter said.

"However, it is now in the national interest for the political uncertainty to end."

They reiterated acknowledgements that they had "made mistakes", but did not detail them in the letter.

Mr Turnbull said the inquiry would examine responses to misconduct scandals and whether institutions had governance or culture problems.

He described banks as the "bedrock of the economy", representing more than a third of Australia's stock market value.

Some supporters of the inquiry, including members of Mr Turnbull's government, said the announcement should have come sooner.

Government MP George Christensen said the prime minister had been "dragged kicking and screaming to this decision".

Leader of the Opposition Bill Shorten accused Mr Turnbull of letting "the rorts and rip-offs continue for more than 18 months".

In explaining his previous opposition to an inquiry, Mr Turnbull said the government had already taken recent measures to make the banking system more accountable.

Mr Turnbull said he had believed that confidence could be damaged by an inquiry, but it was now more important to resolve the debate definitively.

In a description aimed at international markets, the government stressed that Australia's banks remained "unquestionably strong" in the current regulatory environment.

The inquiry has the approval of the central Reserve Bank of Australia and industry regulators.