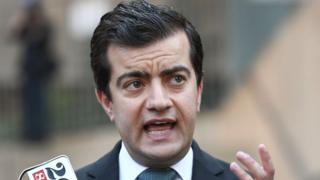 An Australian senator has been stripped of his senior duties after a recording revealed he had contradicted his party's policy on the South China Sea.

Sam Dastyari stood down on Thursday from his position as deputy Senate whip for the opposition Labor party.

The audio showed him making a detailed defence of Beijing's South China Sea policy in a press briefing last year.

Mr Dastyari had earlier played down his remarks as a spontaneous and "mumbled" response to a question.

In the recording published by Australian media outlets, Mr Dastyari is heard saying that Australia should not involve itself in "several thousand years of history".

"The Chinese integrity of its borders is a matter for China," he says.

Mr Shorten ordered Mr Dastyari to relinquish his leadership positions, which also included a role as a Senate committee chair.

Mr Dastyari told the Senate on Thursday: "A recent audio recording shocked me, as it contradicted my recollection of events."

Last year, Mr Dastyari resigned from a frontbench role after admitting to accepting payment from Chinese companies for travel and legal expenses. He was promoted to deputy whip in February.