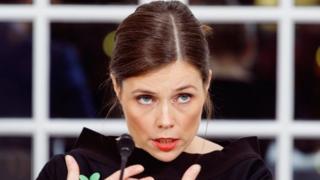 Ms Jakobsdóttir, 41, was asked to form a cabinet despite the fact her party came second in October's snap election – behind the Independence Party.

The poll was called after a row over a paedophile toppled the coalition.

"It's a very interesting moment actually in Icelandic political history because these three parties are very different," Ms Jakobsdóttir told the AFP news agency, adding it was "highly unusual" for the conservative Independence Party and the centre-right Progressive Party to co-operate with the Left-Green Movement.

Ms Jakobsdóttir, a mother of three, is Iceland's second woman prime minister after Johanna Siguroardottir, who was also the world's first openly lesbian head of government in 2009-12.

Under Icelandic law, the country's president asks the leader of the party with the largest number of votes to try to form a government.

But the Independence Party and Mr Benediktsson have been hit by a series of scandals that have tarnished their image.

The row that brought down the previous coalition government erupted after it emerged that Mr Benediktsson's father had written a letter recommending that a convicted paedophile should have his "honour restored".

The furore over the letter relates to an old Icelandic system allowing convicts to have certain civil rights restored if three letters of recommendation from persons of good character are provided.

Icelanders were furious at the secret backing for Hjalti Sigurjón Hauksson – convicted in 2004 of raping his stepdaughter almost every day for 12 years from when she was five.

He served a five-and-a-half-year jail term.

The island nation of 340,000 people was one of the countries hit hardest by the 2008 financial crisis but has turned its economy around by focusing on tourism.

IcetruckNovember 30, 2017
Like story:
tweet
5 Behaviors A Control Freak Displays Before Revealing Themselves
Jay-Z and Beyonce’s once-troubled marriage in their own words