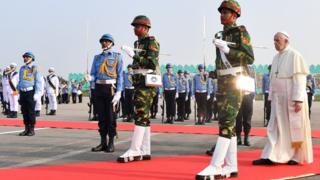 Pope thanks Bangladesh on Rohingya refugees from Myanmar

The Pope had been criticised by rights groups for not using the term when he visited Myanmar, which does not recognise Rohingya as an ethnic group.

He was speaking in Dhaka, where on Friday he will meet Rohingya refugees.

He faces other issues in Bangladesh, including attacks on Christians and other minorities by radical Islamists.

There are even fewer Catholics in Bangladesh than there are in Myanmar. They make up about 0.2% of the population, about 350,000 people, compared with about 600,000 in Myanmar.

But the community has been targeted by Muslim extremists.

Just days before Francis's arrival, a priest disappeared from the same village that saw a Catholic hacked to death last year.

The priest, Walter William Rosario, had been organising a trip to the Pope's Mass in the capital, Dhaka, which takes place on Friday.

In his speech, the Pope said: "Bangladeshi society has been seen most vividly in its humanitarian outreach to a massive influx of refugees from Rakhine State, providing them with temporary shelter and the basic necessities of life. This has been done at no little sacrifice.

"None of us can fail to be aware of the gravity of the situation, the immense toll of human suffering involved, and the precarious living conditions of so many of our brothers and sisters, a majority of whom are women and children, crowded in the refugee camps."

The Pope had in the past used the term "Rohingya brothers and sisters".

Francis also referred to the "indignation" caused by terrorist attacks in Bangladesh.

He said: "The most holy name of God can never be invoked to justify hatred and violence against our fellow human beings."

The Vatican has defended Francis's avoidance of the word Rohingya while in Myanmar.

He had been warned by his Catholic representatives in the country not to use the term for fear of alienating the Buddhist majority.

Myanmar's government rejects the term Rohingya. It labels the community "Bengalis" and says they migrated illegally from Bangladesh.

More than 620,000 Rohingya have fled across the border since August amid a crackdown which Myanmar's government says was aimed at rooting out violent insurgents following deadly attacks on police posts by Rohingya militants.

The UN has described the crackdown in the state of Rakhine as "textbook ethnic cleansing".

A Vatican spokesman said that although its diplomacy was "not infallible", the Pope had lost no "moral authority" in his approach, which was intended to "build bridges" in Myanmar.

The spokesman, Greg Burke, said: "The fact that the Pope is here and draws attention to the country itself is an incredibly positive thing."

On Friday, the Pope will hold talks with Bangladesh's PM Sheikh Hasina.