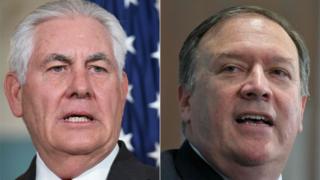 The White House has dismissed reports that Secretary of State Rex Tillerson is about to be replaced.

And a state department spokeswoman said the reports "were not true".

The denials come amid reports from several news organisations, citing unnamed administration officials, that plans were being drawn up to replace him with CIA chief Mike Pompeo.

President Donald Trump and Mr Tillerson have disagreed on foreign policy issues and are said not to get on.

Where are the reports coming from?

They first emerged in the New York Times and Vanity Fair, which quoted government sources.

The Associated Press then quoted two unnamed White House officials as saying a plan was being discussed.

Now Reuters news agency, too, is quoting sources within the administration.

Under the alleged plan, Mr Pompeo would be replaced at the CIA by Republican Senator Tom Cotton, and the reshuffle could take place as soon as December or in January.

However, it is not yet clear whether Mr Trump has given final approval to the move, the New York Times says.

How is the Trump administration reacting?

Business as usual is the watchword.

"There are no personnel announcements at this time.

"Secretary Tillerson continues to lead the state department and the entire cabinet is focused on completing this incredibly successful first year of President Trump's administration."

In a later briefing, Ms Sanders added: "When the president loses confidence in someone, they will no longer serve here."

At the state department, spokeswoman Heather Nauert conceded that Mr Tillerson and Mr Trump have had policy differences.

But she said that White House Chief of Staff John Kelly had phoned the department to say "the rumours are not true".

When asked how Mr Tillerson, who is due in Europe next week, could continue to do his job while the White House was briefing journalists he was about to lose it, she said: "The secretary of state is someone who doesn't let his feathers get ruffled very easily."

And Defence Secretary James Mattis told reporters at the Pentagon that there was "nothing" to the reports.

Why would Trump want Tillerson gone?

Relations are not reported to be good.

Mr Trump's disenchantment with Mr Tillerson, a former chief executive of energy giant Exxon Mobil, has been rumoured for some time.

The secretary of state has defended the multi-party deal to curb Iran's nuclear ambitions in return for a loosening of sanctions – an agreement derided by Mr Trump.

They have also differed, at least publicly, on North Korea.

Mr Tillerson's alleged description, in private, of Mr Trump as a "moron" is unlikely to have helped relations either.

And in June, Mr Trump and Mr Tillerson were giving out contradictory messages about the dispute between Saudi Arabia and Qatar.

The secretary of state warned that the Saudi-led blockade of Qatar could affect the fight against extremism and was having humanitarian consequences.

Mr Trump, on the other hand, appeared to endorse Saudi policy, suggesting the blockade might herald "the beginning of the end to the horror of terrorism" – a reference to allegations Qatar allows funding of extremist groups.

To add to Mr Tillerson's woes, his plans for radical restructuring of the state department are not going down well in some quarters.

Democrats, and some Republicans, have expressed concern the restructuring – involving sackings and budget cuts – could undermine America's interests abroad.

Tensions between Mr Trump and Mr Tillerson have been widely reported. That seems partly for personal reasons – the two are chalk and cheese in temperament and the way they work. But Mr Trump is also said to have complained that his secretary of state is too "establishment".

The president has undermined Mr Tillerson on key policy areas with his fiery tweets. Yet he's also quietly accepted the secretary's diplomatic strategy on issues like North Korea, suggesting the relationship is more complex than reported.

Separately, Mr Tillerson's management style has also alienated chunks of his natural constituency: many in the state department, Congress, and foreign policy community. That's because he accepted Trump's proposed budget cuts without much of a fight and, at the same time, launched a major redesign of the department without saying where it was heading or explaining the details.

There's also been an exodus of dismissed or disillusioned senior staff who aren't being replaced quickly enough. Not all of this is Mr Tillerson's fault, but he has failed to navigate the push and pull of Washington's politics.

What are the possible wider changes?

The secretary of state's firing would form part of a wider national security team shake-up overseen by Chief of Staff Kelly, the New York Times reports.

Mr Pompeo, as Mr Tillerson's possible replacement, is reputed to be closer to Mr Trump on security issues.

And Tom Cotton, the Arkansas senator and reported choice for new CIA head, holds similar views to the president on the Iran nuclear deal.

The decorated Iraq and Afghanistan war veteran is described as a hawk who wants to increase the defence budget.

Mr Tillerson, 65, was appointed in January and his sacking would cap one of the shortest tenures for an American secretary of state.

His appointment was a controversial one, thanks to his close links to Russian President Vladimir Putin stemming from his work on major oil contracts in Russia.

The Trump administration faces several investigations into whether there was collusion between his election campaign and Russian officials.