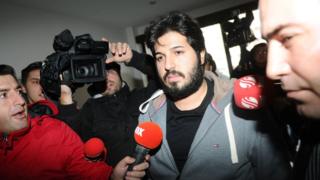 Turkey has attacked the US judicial system after a controversial gold trader told a New York court he had bribed a Turkish government minister.

Mr Zarrab said he had paid the bribes to facilitate deals with Iran, which was under sanctions at the time.

The case has strained relations between Ankara and Washington.

Mr Zarrab had been due to go on trial but is now the prosecution's star witness after pleading guilty.

He is testifying against Turkish banker Mehmet Hakan Atilla on a series of international corruption allegations that reach the highest levels of the Turkish government.

Mr Zarrab was arrested by US officials in 2016 for allegedly conspiring to evade US sanctions against Iran, engaging in hundreds of millions of dollars worth of transactions on behalf of the government of Tehran, money-laundering and bank fraud.

The Turkish government had previously said that Mr Caglayan acted within Turkish and international law.

Mr Zarrab also described how he ran an international money laundering scheme aimed at helping Iran get around US sanctions.

The case is being closely followed in Turkey but the country's mainstream media have treated it with caution, BBC Turkish service's Enis Senerdem says.

Twitter users have created accounts to post translated messages from US journalists tweeting from the courtroom, our correspondent adds.

IcetruckNovember 30, 2017
Like story:
tweet
Ukraine ‘father of deceased’ sets off courtroom grenades
Thousands flee Bali volcano, but some stay put or run to it