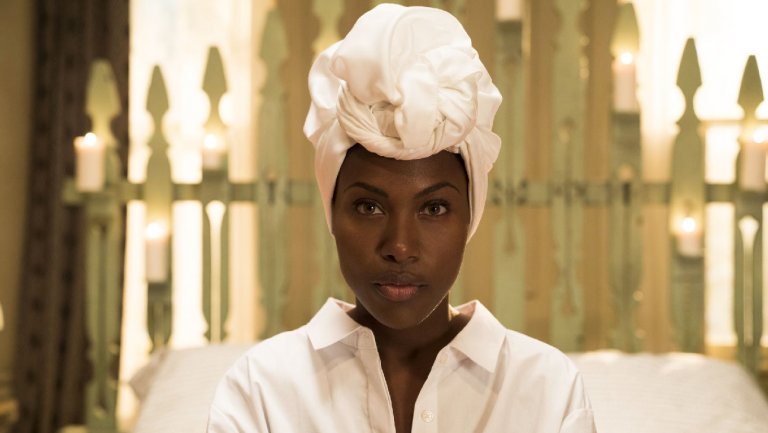 The actress talks with THR about finding hope through art (like 'Shots Fired' and 'Underground') and the importance of seeing Nola Darling's evolution on screen.

DeWanda Wise, star of Spike Lee's Netflix series She's Gotta Have It, has had a banner 2017. After critically acclaimed turns in WGN America's Underground and Fox's Shots Fired, she's "superb" as twentysomething Brooklyn artist Nola Darling in the present-day adaptation of Lee's 30-year-old film. It's something Wise is still coming to terms with.

"I feel like such a pronounced learning curve when you're jumping into Hollywood and you're confronted with the reality that not everyone loves it," Wise tells The Hollywood Reporter. "There are actors whose careers are long and varied, and maybe didn't have the opportunities that they wanted, and it's become this thing that they do. It's become a job like any other job, right? And so, if you can imagine going through training and having a dream and a vision of what was possible and where you could see yourself, and perhaps not even really having an example of what you wanted to do in film and TV, and then having your entire mind blown, forever changed — that was 2016 for me."

But those three roles in a row are not necessarily just a product of good timing, but rather an evolution of very specific work the actress has done during the past half-decade of her career.

"The last couple of years there was a turning point in my own preferences. So many of our icons for black women specifically were, like, Clair Huxtable [from The Cosby Show]. If you were the woman in a [show], it's like, we are strong and upstanding and poised," Wise says. "I think it was around 2011 where I was just like, I'm not really interested in a certain quality of respectability politics. I'm interested in work that shows us — shows people in general, but I'm a black woman, so black women — in all their complexity and humanity because in seeing that from me has the potential for viewers, for anyone experiencing the thing [portrayed on screen] to say, 'I see myself,' or, 'this is true.' The more I feel like my work can connote, 'Oh, this is true,' the further it goes — the greater potential it has for impact."

Shameeka, the mother of a boy killed by police in Fox's short-lived drama Shots Fired, felt like an "answered prayer," the actress says.

"I had been deeply heartbroken, enraged, at a loss for what to do about a situation left a lot of people of color, a lot of people in this country — especially if you expand the conversation to gun control — really helpless. Being an artist, being an actor for me started off as a cathartic space. It was such a literal answer to my heartache," Wise says.

She adds, "I was just really struck by the notion of delving into the real life of what has now become something that we've been desensitized to, what's now become just in a soundbite, a scroll across the bottom of the news. It was such a precious honor, honestly, to play one of the mothers of the movement in fiction form. It allowed me not only the space to converge an issue I felt passionately about with my art, but also it was really invigorating in the sense that in the process of researching and learning about the many organizations that so many of the mothers have formed and created, it left me feeling less helpless."

On WGN America's gone but not forgotten Underground, Wise played a young slave in a sexual relationship with her owner.

"That character's journey, she goes from this victim of a system to a false kind of power," Wise says of the uneven dynamic between an enslaved woman and a slaveowner. "Clara is younger than Nola and she was just on the very edge of discovering the power in her sexuality. It was a really weird bridge, almost, in between roles."

Two harrowing roles later, and she was hoping for a role with a little more humor and a little more fun — and was cast on She's Gotta Have It two weeks before filming on the series began.

"I read all 10 scripts before I signed my contract. There was so much in Nola that I saw in my friends, in myself, in where I was in my early 20s. There was just such a rich and vast life there," Wise says. "I really credit Kim Coleman, who cast it. She saw a need for a certain quality of an emotional life, a certain level of depth. I am, for better or worse, that — full of thoughts and contemplation. There's just no shortage to my level of inquiry. So that will inherently be in all of my work, but it's definitely something that's super and immensely pronounced in Nola."

The role of Nola, which executive producer Tonya Lewis Lee told THR that Wise helped shape — "I think when DeWanda came on I know it was really important to [Spike] to hear her voice and [thoughts about] embodying that character," the co-showrunner said — was one that Wise took to immediately.

"I knew Nola was a bit messy. I knew her life was getting more complicated," Wise says. "All these things were clear to me. I had no misgivings or preconceived notions about the fact that she's flaky and not very reliable and gets caught in her art, and all these other things that can be true of artist. But there are people who just hate Nola. I was like, 'Oh, that's so interesting,' because I love her. I love living in her skin. There is a level of understanding and compassion that I have for the place that she's in in her life. She is in this middle ground of becoming. It's important to see that middle ground of becoming in an age where we see the final product so often, in an age where we see the finishing touches to everything. It's so vital to see the process. It's kind of a parallel conversation with young actors—it's not like you just suddenly jump on a red carpet. There's so much in between and so much of the in between is not only tied to the hustle and grind of figuring out your career, but the hustle and fight of figuring out who you are."

While Nola does have a complete arc throughout the first season of She's Gotta Have It, Wise said she's hopeful she can explore another chapter of the character's life.

"It's so fascinating to me watching because I was really satisfied. I remember finishing it — I've seen it twice — and feeling really satiated, like we had gone through this specific chapter in the life of a woman. That hunger to see what would be next, we've had conversations. I've had conversations with the writers, with the showrunner, about what it would mean for her to continue on and for us to bear witness to that, but it feels so either-or and I don't know if I've had that experience much in television."

Regardless of what's next, such a whirlwind experience has forced Wise to re-examine her priorities.

"I should probably just do away with my dreams for myself and my vision of what's possible because, clearly, I'm not doing it right and I'm not dreaming big enough," she says. "To call it a dream would be such a disservice. I just never envisioned that the kind of depth and the kind of work that I was able to do this past year, one, would exist and, two, would be an option available to me."

She's Gotta Have It is available to stream on Netflix.