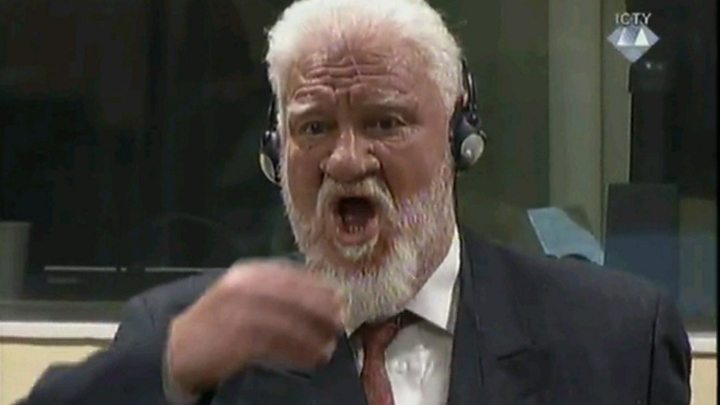 The authorities are investigating how he smuggled poison into the high-security courtroom.

Praljak, 72, died in hospital after declaring to the court that he was innocent and drinking from the vial.

His 20-year sentence for war crimes in Bosnia had just been reaffirmed.

It was the tribunal's final session. The confirmation rulings against Praljak and five other defendants brought an end to more than 20 years of work by the International Criminal Tribunal for the former Yugoslavia (ICTY).

Some Bosnian Croats held vigils to remember a man they regard as a hero while the national parliament in Croatia observed a minute's silence.

How did he die?

Traces of a deadly substance were found in the vial. the Dutch public prosecution service said.

"We cannot yet say what that substance was," spokesman Vincent Veenman told AFP news agency. "Further testing is needed."

He then drank from a small brown glass bottle and announced: "I have taken poison."

The presiding judge cut short the hearing and Praljak was taken to hospital.

How tight is security?

Peter Robinson, a lawyer for convicted Bosnian Serb war criminal Radovan Karadžić, told the BBC he could not understand how anyone could have passed poison to a prisoner.

"We go through two security checks when we visit detainees," he said. "Two metal detectors. You can't bring drinks, not even a bottle of water or Coke. Everything is searched before you go in.

"I've only ever seen him [Praljak] with his family, in the room next door to us. But when his family came it was private. There are no guards inside the room at the time, they stay outside the door. You can see your own doctors with special permission."

Slobodan Praljak would probably have been driven to court from the ICTY detention unit. Even if he was frisked before entering the courtroom, it is not inconceivable he could have passed off the bottle or vial as medicine or other innocuous substance.

So the vital question for the investigators is: how did he get hold of the lethal substance?

The court's detention unit is nestled in the sand dunes inside a Dutch prison complex in the Scheveningen neighbourhood. It takes approximately 10 minutes to travel between this building and the court.

Locals have nicknamed it the Hague Hilton on account of its relatively comfortable regime.

Detainees are only locked up in their cells at night. During the day they are free to move around and socialise. Visits are mostly supervised, although conjugal rooms are available inside the unit.

Though allies against the Bosnian Serbs during the 1992-95 civil war, Bosnian Croats and Muslims also fought each other for a period of 11 months, with Mostar seeing some of the fiercest fighting.

Praljak was convicted in 2013 of crimes against humanity committed while commanding Bosnian Croat forces. The ICTY found that he had:

In its final judgement on Wednesday, the ICTY found that he and the five others remained convicted.

However, it did allow part of Praljak's appeal, finding that Mostar's Old Bridge had been a "military target at the time of the attack".

Why do some regard him as a hero?

However, Croatian President Kolinda Grabar-Kitarović went on television to say Croats needed to admit that some of their compatriots had committed crimes in Bosnia.

In Bosnia itself, Dragan Čović, the Croat member of the tripartite presidency, said his suicide showed "what sacrifice he was ready to make" to show he was not a war criminal.

About 1,000 Bosnian Croats gathered in a Mostar square late on Wednesday to light candles in memory of Praljak, Reuters news agency reports.

A Mass in his honour was held in a packed Roman Catholic cathedral, where churchgoers draped themselves in Croatian flags, the agency says.

"I came here to support our generals and pay respect to General Praljak who could not bear injustice and made his final verdict," said Bosnian Croat war veteran Darko Drmac. "He is our pride and hero."

Mostar and all of Bosnia-Herzegovina are still divided on ethnic lines, says the BBC's Jeremy Bowen, who reported from there during the civil war.

At least the war's victims, thousands of whom have been to The Hague, have had some justice thanks to the ICTY, our correspondent says.

Its work to convict the worst war criminals Europe has seen since the Nazis, he adds, should not be overshadowed by the suicide of Praljak.