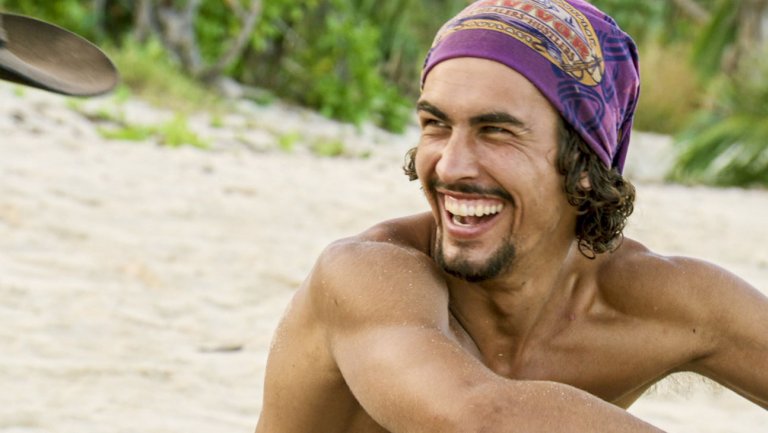 'Survivor: Heroes vs. Healers vs. Hustlers' Doubles Down In 'Buy One, Get One Free'

The Heroes-Hustlers seven-player alliance runs into trouble in a dramatic two-episode dose of 'Survivor.'

[This recap contains spoilers for the Wednesday, November 29 episode of Survivor: Heroes vs. Healers vs. Hustlers.]

Awww man. Survivor: Heroes vs. Healers vs. Hustlers came close to a season-salvaging double on Wednesday night. The two episodes featured splintering alliances, jaw-dropping blindsides and positioned several new castaways as potential winners in this generally milquetoast season. I don't know if either episode landed its game-changing vote flawlessly, but that's the fault of the so-so players who, if nothing else, look like they're actually finally engaging with and engaging in Survivor.

The Hustlers/Heroes seven-person alliance was not a good alliance. It was founded of numeric ease and I'm never going to forgive them for the decision to vote Desi out instead of Joe when they had the chance. It wasn't like it ultimately mattered, as anybody who watched Wednesday's episodes already knows, but it was just a pointlessly dumb, unconvincing vote. So for certain people to be complacent about their position within a lame, bloated alliance was a Survivor cardinal sin and I'm relieved that steps were immediately taken to tear that alliance to shreds.

Shame on Chrissy and especially Ryan for somehow getting comfortable in the seven and looking two votes ahead. Who does that? Not somebody good at Survivor. I don't feel the same contempt for JP because, if we're being honest, was JP ever really playing Survivor? He was having a decent time out there. He caught some fish. He began to grow Ian Ziering hair. He flirted a bit. He got blindsided. He was gracious. Personally, I was impressed he was able to figure out that he'd be eliminated from the game.

I'll get back to that.

Good for Lauren for steering a game shake-up. She began making her move last week with a surprise immunity win and after this week's episode, where she cried about doing everything for her daughter, she's got a workable resumé going forward. After winning a hamburger and scenic flight reward, she selected Devon, Ben and Ashley to join her. Ryan seemed like he was accepting of Lauren's reward choice and offered up an explanation for her choices and while that's the sort of thing that of course one would say in that situation, all signs point to him actually believing it. Lauren nodded politely and then mobilized her reward buddies and formed a new four-person core alliance. Why was Ashley included? I'm not sure. But we'll get back to her, too.

The decision to have Ben pretend that he was clueless on the big vote that turned against Chrissy, Ryan and JP was brilliant, though mostly brilliant for Ben. It let him keep Ryan as an ally and let the newly formed alliance confuse and freeze out Joe, whose general game aptitude ended up being wildly out of proportion to what some Survivor recappers — I'm talking about me — figured.

So let's go to tonight's votes.

Why take JP out? No, really. This was basically the same as the Desi vote. You have the power and you have the element of surprise and you've got one opportunity. Do you target a potentially dangerous player or do you take out the big, innocent lug whose physical aptitude is unquestioned, but whose ability to dominate important challenges remains untapped and whose chances of winning the game are nil? If you're confident that your move is a complete shock and you know Ryan's got an idol and you can eliminate him, idol-in-pocket, why wouldn't you? And if you don't want to risk bringing Ryan's idol into play, why not take out Chrissy? This was not a Cole situation in which the potential of a long immunity streak was very real and it wasn't a Cole situation in which people were sick of him and his absence at camp might boost morale. Nobody was disliking JP and nobody in the editing room bothered to explain how he came to be the target, but that's the way the votes went and Ben's pseudo-shock was almost as good as Chrissy and Ryan's real shock.

JP took his elimination as blandly as one could hope for. He wasn't angry. He was just chill and admiring.

But how about the next vote?

On one hand, it was very satisfying for Joe to be kneecapped after an episode in which he was smug and snarky to Ben about a vote that: A) He'd been an entirely incidental beneficiary of and B) That Ben was actually on the right side of, albeit in secret. Joe sat there at tribal and said this was the first time he felt comfortable and then he was voted out and that was great. And, thankfully, Joe was a good sport and congratulated the others for playing him. For a crazy man and a paranoiac, he was lulled into submission really easily. I'm betting he gets invited back for a future Survivor season, but that'll just be Survivor overrating him. His gameplay consisted of finding two idols, using one correctly and throwing the other way.

What that meant, though, was that the new Core Four alliance held together for consecutive votes and what's the fun in that? For maximum whiplash entertainment, this episode needed for Ben to go from King Arthur last week to faux deposed King Arthur to legitimately suckerpunched in the course of three hours. If Ashley and Lauren had used this moment to vote Ben out, with an idol hidden on his possession, it would have set the rest of the season up as a free-for-all. Joe, especially after several days of non-stop annoying of his colleagues, had probably moved into never-gonna-win goat territory. I know this is contradictory, but just as I think you vote Joe out over Desi because you know Desi is predictable and Joe is a wild card, I think you vote Ben out over Joe because of the way in which Ben is predictable: Nobody's beating Ben. Barring Lauren going on an immunity streak and then having an emotional visit from home, Ben's unstoppable. And who's hurt by turning on Ben? He had no ally so close that there would be earnest alienation.

But yes, this is just me speaking from a "I want crazy things to happen because this season requires crazy if it wants to close strong" position. You take out Joe because that's what the numbers require. If you turn on Ben this early, you run the risk of Joe, Mike, Chrissy and Ryan forming an impromptu alliance just to get rid of a Devon or Lauren. Without Joe, Doctor Mike becomes nothing, while Chrissy and Ryan are adrift and now, because Ben urged Ryan into playing his, idol-less.

Let's get to some bottom lines…

Bottom Line, I. The real bottom line is that this episode was twisty and unpredictable, but it also resulted in the elimination of one player who was nothing and one player who should have been sent home three votes ago. Joe could have been voted out smoothly in the first vote with no hurt feelings among the Heroes-Hustlers alliance. If we'd walked away from this episode with both Ryan and then Ben gone and taking two idols with them? That would have been fun.

Bottom Line, II. Doctor Mike's stubborn insistence that his wasted idol last week was a smart and intentional play was laughable and then the speed with which he began lording his imagined power over Ryan was predictable. I don't like it when bad Survivor players get delusions of grandeur and Doctor Mike was a bad Survivor player. I'll leave it for others to decide if The Coconuts — "Coco" because Joe is a little cocoa and "Nuts" because Doctor Mike is a urologist — was actually clever. But nothing Mike said about his Tribal Council strategy last week justified his Tribal Council strategy last week.

Bottom Line, III. Welcome back to the game, Ashley! Formerly most memorable for the showmance-that-wasn't-a-showmance with JP, Ashley got a courtesy invite to Lauren's new alliance and also won an immunity in the first episode. Not that she needed it. It's not a winning resumé yet, but it's a resumé, which she didn't have before tonight.

Bottom Line, IV. Chrissy won the episode's other individual immunity, which she probably didn't need, but I guess it didn't hurt. The degree to which Chrissy and Ryan were blindsided in Wednesday's first hour stripped me of most of my respect for their game awareness thus far. And then I wasn't impressed by how either tried to cover in the second hour. Both Chrissy cowering before Lauren and Ryan kowtowing to Doctor Mike were the epitomes of too-little-too-late desperation from players who were operating in a bubble previously. This is the second time that Chrissy has been caught pretending to take last minute interest in somebody she'd never talked to previously, which is bad social Survivor. Ditto with Ryan's inability to think quickly on his feet when Devon confronted him about telling others about his secret idol. Floundering this badly this late in the game makes it hard for me to root for you. Come on! Ben, Lauren and Devon sitting out that first immunity to eat chocolate and peanut butter after they'd just had a food reward should have let Ryan and Chrissy know that their group wasn't as cohesive as they thought.

Bottom Line, V. The degree to which Devon is becoming more and more early career Keanu Reeves with each passing episode is mighty amusing. When he eventually gets voted out, I hope he stares them down and reveals, "I am an EFF-BEE-EYE AGENT!" Or maybe he can just win and yell, "Excellent!" I could root for that.

Bottom Line, VI. Nobody playing this season knows very much about King Arthur. Or a lot of other things. Ryan's had a couple good quotes per episode, but they did not cast well for talking head hilarity (or insight) this season.

Check out Josh Wigler's exit interviews and come back next week for more recapping excitement.