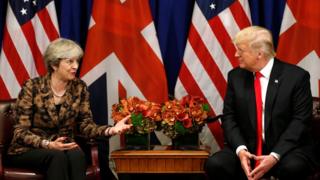 Donald Trump has told Prime Minister Theresa May to focus on "terrorism" in the UK after she criticised his sharing of far-right videos.

"Don't focus on me, focus on the destructive Radical Islamic Terrorism that is taking place within the United Kingdom," Mr Trump tweeted.

The US president had earlier retweeted three inflammatory videos posted online by a British far-right group.

Mrs May's spokesman said it was "wrong for the president to have done this".

The US and the UK are close allies and often described as having a "special relationship". Theresa May was the first foreign leader to visit the Trump White House.

The speaker of the House of Commons has granted a request for an urgent question on the matter from Labour MP Stephen Doughty.

[email protected]_May, don’t focus on me, focus on the destructive Radical Islamic Terrorism that is taking place within the United Kingdom. We are doing just fine!

MPs have been reacting to the tweet, with Work and Pensions Secretary David Gauke backing Mrs May and calling Britain First a "ghastly, obnoxious organisation".

But while Education Secretary Justine Greening said she disagreed with Mr Trump's actions, they should not be allowed to damage the special relationship between the two countries.

The videos shared by Mr Trump, who has more than 40 million followers, were initially posted by Jayda Fransen, the deputy leader of Britain First, a group founded by former members of the far-right British National Party (BNP).

Ms Fransen, 31, has been charged in the UK with using "threatening, abusive or insulting words or behaviour" over speeches she made at a rally in Belfast.

Several leading UK politicians have criticised the president for retweeting her posts, as has the Archbishop of Canterbury Justin Welby, who said it was "deeply disturbing" that Mr Trump had "chosen to amplify the voice of far-right extremists".

And it has led to renewed calls for Mr Trump's planned state visit to the UK to be cancelled, although Downing Street said on Wednesday that the invitation still stood.

London Mayor Sadiq Khan, who has previously called for the "ill-judged" trip to be cancelled, said: "It beggars belief that the president of our closest ally doesn't see that his support of this extremist group actively undermines the values of tolerance and diversity that makes Britain so great.

"After this latest incident, it is increasingly clear that any official visit at all from President Trump to Britain would not be welcomed."

In hitting out at Mrs May, Mr Trump first tagged the wrong Twitter account, sending his statement to a different user with just six followers. He then deleted the tweet and posted it again, this time directing the message to the UK PM's official account.

After already condemning Mr Trump's actions on Wednesday, Brendan Cox – whose wife, MP Jo Cox, was murdered by a right-wing extremist who shouted "Britain first" before committing the act – told the US president to focus on problems in his own country.

You have a mass shooting every single day in your country, your murder rate is many times that of the UK, your healthcare system is a disgrace, you can’t pass anything through a congress that you control. I would focus on that. https://t.co/SNcqOZGvLQ

TV presenter and journalist Piers Morgan, who has supported Mr Trump in the past, said the president "owes our prime minister an apology, not a lecture" after he "publicly endorsed the most extreme bunch of Islamophobe fascists in Britain".

But American conservative commentator Ann Coulter – who is one of the 45 people followed on Twitter by Mr Trump and retweeted the videos first – defended her president's words to Mrs May, saying he had "only given as good as he gets".

It's clear at this point that Donald Trump won't let a perceived slight or criticism go unanswered – even if it's from a supposed friend. Even if it's from the leader of the president's closest international ally.

So shock isn't exactly the right word to describe the reaction to Mr Trump's initially botched attempt to tell Theresa May to, in effect, mind her own business. This is just another example of the US president's self-described "modern-day presidential" use of social media, where Twitter is a cudgel for score-settling no matter the diplomatic cost.

When Mr Trump assumed the presidency, one of the first foreign dignitaries he received was Mrs May, and it appeared they formed a quick bond – briefly holding hands as they walked past the White House Rose Garden. Those bonds will now be tested in a spat over a few morning retweets of inflammatory videos.

It's a wholly unnecessary controversy, but the international consequences could be all too real.

What did Trump retweet?

The first video purportedly shows a "Muslim migrant" attacking a young Dutch man on crutches. However, the claim in this tweet appears to have little substance.

A spokesperson from the Dutch Public Prosecution Service told the BBC that the person arrested for the attack "was born and raised in the Netherlands" and was not a migrant.

The Dutch embassy in Washington DC confirmed this on Twitter.

[email protected] Facts do matter. The perpetrator of the violent act in this video was born and raised in the Netherlands. He received and completed his sentence under Dutch law.

The second video retweeted by Mr Trump shows a man smashing a statue of the Virgin Mary.

This video was uploaded to YouTube in 2013. The man in the clip says: "No-one but Allah will be worshipped in the land of the Levant," which could place him in Syria.

The third video originates from the riots that took place in Egypt in 2013, and shows a man being pushed from the top of a building in Alexandria. In 2015, those involved in the the incident were prosecuted, and one man was executed.

White House spokeswoman Sarah Sanders said on Wednesday that Mrs May and other world leaders knew that "these are real threats that we have to talk about".

"Whether it's a real video, the threat is real," she said.

What other reaction has there been?

Mr Trump's actions on Wednesday were criticised by both Democrats and Republicans.

Republican Senator John McCain said he was "surprised" at the president's tweets.

Meanwhile, Senator Orrin Hatch of Utah said that Mrs May was "one of the great world leaders", adding that he had "incredible love and respect for her".

“PM @theresa_may is one of the great world leaders, I have incredible love and respect for her and for the way she leads the United Kingdom, especially in the face of turbulence.” -OGH
(Photo: Hatch at 10 Downing Street last Tuesday) pic.twitter.com/KQoH2LoRe9

Khizr Khan, the father of US soldier Humayun Khan who was killed in the Iraq war, told Today: "[Mr Trump] holds the hatred. He is an actor, he acts and fabricates these facts to exploit people, innocent people, that fall victim to his bigotry and he sees the benefit.

"We all need to unite ourselves, all decent people of the world, against the menace of terrorism."

In the UK, many politicians voiced their concerns about the videos that were shared.

So POTUS has endorsed the views of a vile, hate-filled racist organisation that hates me and people like me. He is wrong and I refuse to let it go and say nothing

And Foreign Secretary Boris Johnson tweeted that Britain First had "no place" in British society.

Opposition MPs were even stronger in the criticism, with Labour leader Jeremy Corbyn describing the retweets as "abhorrent" and "dangerous".

IcetruckNovember 30, 2017
Like story:
tweet
Prince George reveals what he wants for Christmas
Thousands flee Bali volcano but some stay put or run to it