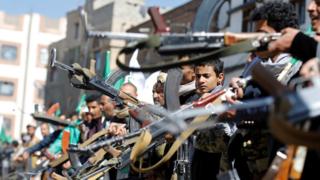 There have been deadly clashes between Yemen's allied Houthi rebels and supporters of ex-president Ali Abdullah Saleh, as tensions between them grow.

It accused the Houthis of undermining their partnership.

The once bitter enemies are fighting a war against forces loyal to the current President, Abdrabbuh Mansour Hadi.

More than 8,670 people have been killed and 49,960 injured since a Saudi-led coalition backing Mr Hadi intervened in the conflict in 2015, according to the UN.

Wednesday night's clashes in Sanaa took place around the Saleh Mosque, which is Yemen's largest and is named after the country's former authoritarian leader.

The GPC said Houthi fighters had tried to occupy part of the complex ahead of a rally nearby on Thursday to celebrate the Prophet Muhammad's birthday.

The fighters "broke into the Saleh Mosque, fired RPGs and grenades inside the mosque and put its regular guards under siege", it alleged.

The rebel-run Saba news agency cited a source at the Houthi-controlled interior ministry as saying its security personnel had sought access to the mosque to ensure the safety of those attending Thursday's rally.

After they were refused entry, the security personnel came under fire from "armed elements" inside without warning, forcing them to respond, the source added.

The source said a number of security personnel were wounded, but medical officials at two hospitals told AFP news agency that nine Houthi fighters were killed.

On Saturday, Houthi leader Abdul Malik al-Houthi appeared to accuse Mr Saleh's supporters of failing to "understand the concept of alliance and partnership". It came after the GPC referred to Houthi fighters as "cartoonish mercenary things".

The two sides also clashed in August, after a GPC rally in Sanaa. The day after the event, a GPC politician and three Houthi security personnel died in a gun battle at a checkpoint. Clashes erupted the next day near the home of one of Mr Saleh's sons.

The Houthis, who champion Yemen's Zaidi Shia minority, fought a series of rebellions against Mr Saleh between 2004 and 2010. It also supported an uprising in 2011 that forced Mr Saleh to hand over power to Mr Hadi, then his deputy.

Mr Saleh's supporters formed a surprise alliance with the Houthis in 2014, when they seized Sanaa amid widespread disillusionment at the political transition and Mr Hadi's failure to tackle corruption, unemployment and food insecurity.

In early 2015, the allies ousted Mr Hadi, forcing the president to flee initially to the second city of Aden and then to Saudi Arabia. The Saudi-led coalition responded by launching a military campaign to restore Mr Hadi's government.

IcetruckNovember 30, 2017
Like story:
tweet
Why the flu shot this year may not protect you
Oil giant Shell reveals 23% UK gender pay gap