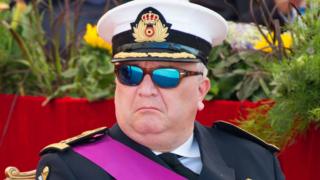 Prince Laurent of Belgium, the brother of King Philippe, has complained to the government about plans to fine him for conducting unauthorised diplomacy.

The prince donned full naval uniform to honour the 90th anniversary of the Chinese People's Army at the embassy.

He had been warned about unapproved meetings with foreign dignitaries.

In previous encounters he:

Prime Minister Charles Michel warned the prince about seeking permission from the foreign ministry before conducting any diplomatic activity.

Despite the warnings, he went to the embassy and tweeted a photo of himself at the celebration (the Twitter account was later shut down). China's state news agency Xinhua also tweeted photos.

28# Qi Huajun and Prince Laurent at a reception celebrating the 90th anniversary of the founding of the People's Liberation Army of China pic.twitter.com/lsEHaeChwY

In a seven-page letter to Mr Michel, quoted by the La Libre news site (in French) on Friday, the prince's lawyer. Laurent Arnauts, argued that his visit to the embassy caused "no diplomatic damage of any kind".

The lawyer says the prince, 54, has no access to social security or a pension, nor has he the right to do any paid work.

It is, he writes, a situation that goes "against the most fundamental human rights in a developed society".

The average net annual income in Belgium is about €25,000, according to the Organisation for Economic Co-operation and Development.