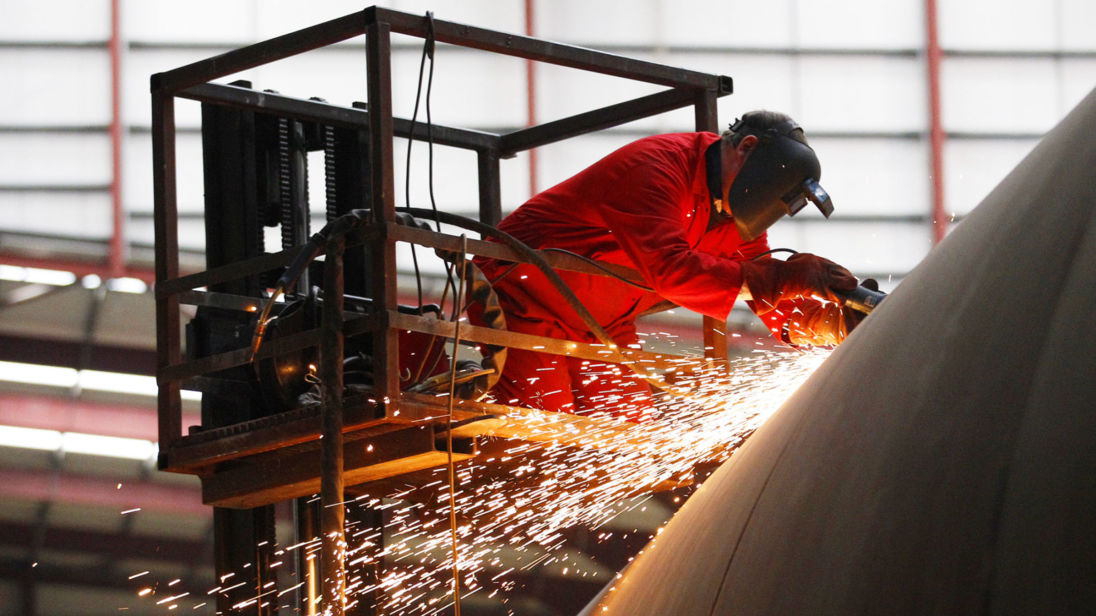 Britain's factories enjoyed their strongest growth for more than four years last month thanks to an upturn in the global economy, closely-watched new figures showed.

The IHS Markit/CIPS manufacturing purchasing managers' index (PMI) suggested the sector was growing at a quarterly rate of nearly 2%, delivering a much-needed boost to the sluggish wider UK economy.

November's reading of 58.2 – on a measure where the 50-mark separates growth from contraction – was up from 56.6 in October and the highest level since August 2013.

Britain's manufacturers have been boosted in recent months by the weakness of the pound following the Brexit vote, which makes UK goods more attractive to overseas buyers.

The latest figures suggested that the currency impact was still helping, though this was less of a factor than earlier in the year in the growth of exports – which was instead mainly attributed to the strength of global economic growth.

Domestic growth also remained strong with an encouraging surge in demand for investment goods such as plant and machinery suggesting UK firms were ploughing capital into their businesses with renewed vigour, the report said.

Firms increased recruitment at the strongest level since 2014.

Rob Dobson, director at IHS Markit, said: "UK manufacturing shifted up a gear in November, with growth of output, new orders and employment all gathering pace.

"On its current course, manufacturing production is rising at a quarterly rate approaching 2%, providing a real boost to the pace of broader economic expansion."

The economy is being held back by a squeeze on consumers thanks to higher inflation – which has been driven up by the collapse in the pound since the Brexit vote making imports more expensive.

Manufacturing represents a much smaller proportion of output than the sprawling services sector – which ranges from bars and restaurants to law and accountancy firms.

James Smith, economist at ING Bank, said: "The manufacturing sector is a clear bright spot in the UK economy at the moment.

"But the larger service sector is still flagging and is why we don't expect a sharp pick-up in growth next year."

Daniela Russell, at Scotiabank, said: "With manufacturing making up only 10% of the economy, we shouldn't get too excited just yet before we get the key services survey next week.

"But if that does paint a similarly positive picture, then it would suggest that momentum is still strong as we head towards the end of the year – and perhaps growth in 2018 won't be quite as bad as the OBR is forecasting."