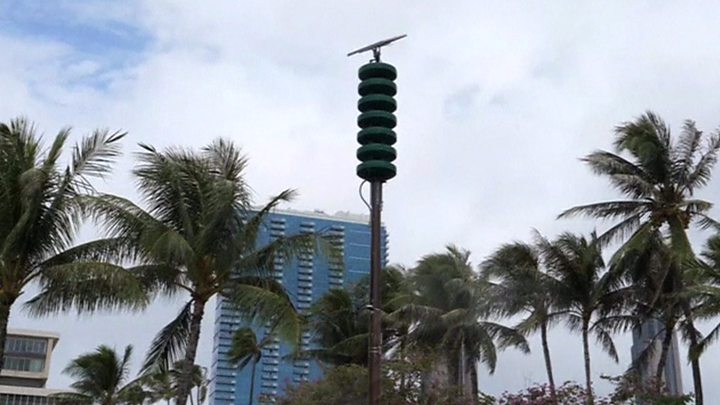 The US state of Hawaii has tested a nuclear attack warning siren for the first time since the end of the Cold War.

The resumption of the monthly tests comes amid a growing threat from North Korea's missile and nuclear programme.

Pyongyang has tested a series of ballistic missiles and in September carried out its sixth nuclear test.

Hawaii, in the Pacific, already has a monthly test of sirens warning of natural disasters, including tsunamis.

The last time a nuclear attack warning siren was tested in the state was in the 1980s in the final years of the Cold War.

But it sounded again on Friday morning and will be repeated on the first business day of every month.

Vern Miyagi, who heads the Hawaii Emergency Management Agency, said it was "critically important" for the public to understand what the different tones mean, the Honolulu Star-Advertiser reported.

A missile launched from North Korea could strike Hawaii within 20 minutes of launch, the paper added.

Hawaii hosts the US military headquarters for the Asia-Pacific region.

North Korea recently tested a new intercontinental ballistic missile which it claims can hit anywhere on the mainland United States.

Experts say the Hwasong-15 appears capable of transporting a nuclear warhead, although it is unclear if Pyongyang is yet capable of making a weapon small enough to be fitted on to a missile.

IcetruckDecember 1, 2017
Like story:
tweet
NBC Not Planning to Pay Out Matt Lauer’s Salary
Amid disturbances, Honduras to hand-count final votes