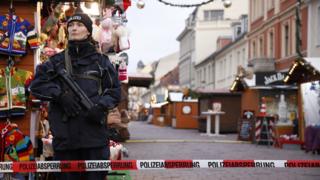 Police in the German city of Potsdam say they have found an explosive device next to a Christmas market.

The device was sent to a pharmacy in the city south-west of Berlin, and was found to have wires protruding from it.

Police said they later found explosives inside, before they conducted a controlled detonation of the device.

Last December, 12 people were killed when an Islamist attacker hijacked a lorry and drove it through a Christmas market in Berlin.

The Potsdamer Neueste Nachrichten newspaper said the device was found near Brandenburgerstrasse in the centre of Potsdam, which has a number of other Christmas markets.

The BBC's Damien McGuinness, in Berlin, says that there is an increased police presence in city centres this year, and that car barriers have been put up around some Christmas markets.

Germany's interior ministry said this week that the risk of an attack on its territory or in Europe was "continuously high".