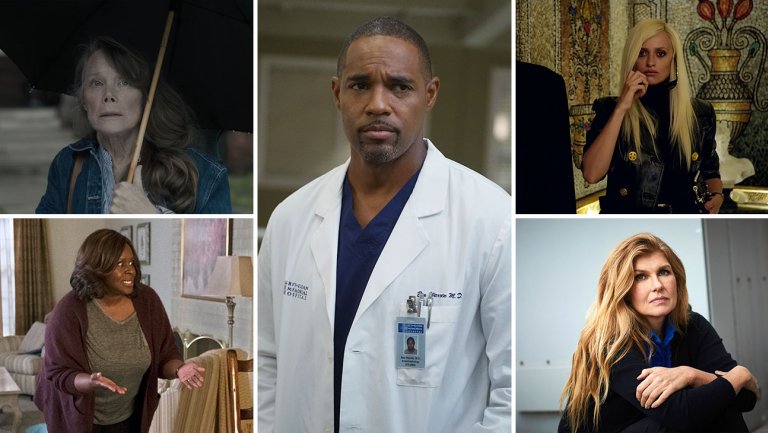 And we're not even counting highly anticipated returning shows like 'Westworld,' '13 Reasons Why' and 'The Handmaid's Tale.'

Breaking through in a Peak TV world of more than 500 scripted originals is a challenging task. That's why top showrunners and stars continue to be in high demand as broadcast, cable and streaming platforms look to cut through the cluttered landscape with familiar faces. Spinoffs and reboots also remain in high demand as most come with a preexisting viewership that reduces costs associated with marketing and promotion.

Here, in a bid to navigate the Peak TV waters, THR picks the 18 most anticipated new shows coming in 2018. (Bookmark THR's handy guide for key premiere — and series finale — dates.)

Fresh off her Emmy writing win for Netflix's Master of None, Lena Waithe returns with a coming-of-age ensemble drama about a group of characters navigating the South Side of Chicago. Waithe created the series, starring Jacob Latimore, Yolanda Ross and Jason Mitchell, with Common also exec producing.

Picked up straight to series, the procedural drama from Glee co-creators Ryan Murphy and Brad Falchuk stars Peter Krause, Connie Britton and Angela Bassett and explores the high-pressure experiences of police, paramedics and firefighters who are thrust into the most frightening, shocking and heart-stopping situations.

The second season of the American Crime Story anthology from Murphy explores the July 1997 assassination of Versace (Edgar Ramirez), the famed fashion designer, by Andrew Cunanan (Darren Criss), who was also behind four other slayings before he ultimately killed himself eight days later. The drama boasts an all-star cast that also includes Ricky Martin and Penelope Cruz.

From exec producer Jenna Bans (Scandal), the drama follows what happens when three suburban moms get tired of trying to make ends meet and decide it’s time to stick up for themselves by robbing the local supermarket at (toy) gunpoint. The series, described as a mix of Thelma and Louise and Breaking Bad, stars Retta (Parks and Recreation), Mae Whitman (Parenthood) and Christina Hendricks (Mad Men), with the latter replacing Kathleen Rose Perkins, who starred in the pilot. (A trailer has not yet been released given the recasting.)

The Black-ish spinoff was developed for ABC but moved to Disney's younger-skewing cable network Freeform. The single-camera comedy follows the Johnsons' eldest daughter Zoey (Yara Shahidi) as she heads off to college and discovers that not everything goes her way once she leaves the nest. Black-ish star Deon Cole will move to the spinoff, which is exec produced by Kenya Barris, Anthony Anderson, Laurence Fishburne, Helen Sugland and Brian Dobbins.

Less than a year after ending its 15-season run on Fox, ABC has revived the singing competition series with a new roster of judges. Katy Perry, Lionel Richie and Luke Bryan will join returning host Ryan Seacrest when the reality juggernaut makes its Disney debut on ABC after the Oscars.

Developed for TV Land but moved to Viacom's upcoming broader-skewing general entertainment hub Paramount Network, the hourlong dramedy is based on the 1988 cult classic. The original film centered on Veronica (Winona Ryder) and her rebel boyfriend J.D. (Christian Slater) and their trials and tribulations dealing with the social order in high school. The reboot is set in the present day and features a new set of popular-yet-evil Heathers — only this time the outcasts have become high school royalty. Heather McNamara (originally played by Lisanne Falk) will be portrayed by Jasmine Mathews; Heather Duke (Shannen Doherty in the film) is a male who identifies as gender-queer whose real name is Heath (Brendan Scannell); and Heather Chandler (originally Kim Walker) has a body like Martha Dumptruck and will be played by Melanie Field. Newcomers James Scullyand Grace Victoria Cox star as J.D. and Veronica, respectively. Original Heathers star Shannen Doherty guest-stars in the pilot, which was directed by Leslye Headland and written by Jason Micallef.

Original stars Roseanne Barr (Roseanne), John Goodman (Dan), Laurie Metcalf (Jackie), Gilbert, Michael Fishman (DJ), Lecy Goranson (Becky) and Sarah Chalke (who also played Becky but is returning for a new role) returning as ABC returns to Lanford, Ill., to find out what the working-class Connor family is like today. The revival will also introduce David and Darlene's young son (Ames McNamara) and daughter (Emma Kenney). Johnny Galecki is also poised to return as David though an official confirmation has yet to come in.

The currently untitled 10-episode spinoff, picked up straight to series, is set in Seattle and focuses on firefighters from the captain down the ranks to the newest recruit in their personal and professional lives. The castmembers are expected to be introduced in an episode of the flagship series this season. Jason George will reprise his role as Ben on the spinoff, which hails from Grey's exec producer Stacy McKee, Shonda Rhimes and Betsy Beers. Jaina Lee Ortiz (Rosewood) stars.

From House of Cards creator Beau Willimon, the space drama marks the small-screen series regular debut for Oscar winner Sean Penn. Picked up straight to series, the eight-episode drama is set in the near future and explores the first human mission to Mars and interplanetary colonization. Natascha McElhone co-stars.

Based on the book by Gone Girl author Gillian Flynn, Amy Adams stars in the eight-episode drama about a reporter (Amy Adams), fresh from a brief stay at a psychiatric hospital, who faces a troubling assignment: She must return to her tiny hometown to cover the murders of two preteen girls. Marti Noxon (who also has Julianna Margulies starrer Dietland due in 2018 on AMC) serves as showrunner, with Big Little Lies favorite Jean-Marc Vallee on board to direct the drama, which co-stars Oscar nominee and Emmy winner Patricia Clarkson.

Based on Caroline Kepnes' best-seller of the same name, the drama is a rare cable pickup for TV's busiest producer Greg Berlanti. The series, from showrunner Sera Gamble (The Magicians), is described as a 21st century love story about an obsessive yet brilliant twentysomething who uses the hyper-connectivity of today's technology to make the woman of his dreams fall for him. Penn Badgley leads a cast that includes Shay Mitchell and Elizabeth Lail.

The first season of the anthology drama explores the rivalry between the late Tupac Shakur and Biggie Smalls and chronicles the dual police investigations into the slaying of rap's biggest stars. Josh Duhamel and Fargo breakout Bokeem Woodbine star as LAPD detectives, while Wavyy Jonez plays Biggie and Marcc Rose is set as Tupac.

The Superman prequel series, from David S. Goyer (Man of Steel, The Dark Knight) is set two generations before the destruction of the legendary Man of Steel’s home planet. It follows Superman’s grandfather (Cameron Cuffe) — whose House of El was ostracized and shamed — as he fights to redeem his family’s honor and save his beloved world from chaos. The series will take place in the past and present and feature other DC Comics heroes including Adam Strange and Hawkwoman.

The dark comedy, directed by True Detective Emmy winner Cary Fukunaga, boasts some major star power in Oscar winner Emma Stone, Jonah Hill and Justin Theroux. Based on a 2014 Norwegian comedy, the original Maniac revolves around Espen, a mental patient at a psychiatric ward who escapes reality and lives in a fantasy world in his mind.

The Ballad of Buster Scruggs (Netflix, 2018)

Prolific producers Ethan and Joel Coen (Fargo, The Big Lebowski, No Country for Old Men) will make their small-screen debut with the Western anthology. Written and directed by the brothers, the series will feature six tales about the American frontier, each telling a distinct story about the American West. Tim Blake Nelson stars as Buster.