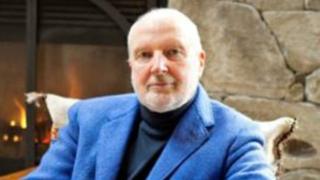 The prosecutor accuses Mr Fuller, former vice-chair of the US National Intelligence Council, of having links to Muslim cleric Fethullah Gulen.

Mr Gulen, who lives in the US, is blamed by Turkey for last year's failed coup attempt. He denies the claim.

More than 50,000 people have been arrested in Turkey pending trial over links to Mr Gulen.

Another 150,000 people have been sacked or suspended from jobs in the public and private sectors since the coup attempt on 15 July 2016.

Turkish-US relations have been strained in recent months.

Earlier this week, a Turkish-Iranian gold trader told a US court that Turkish President Recep Tayyip Erdogan had personally approved his sanction-breaking deals with Iran.

Reza Zarrab is a key witness in the criminal trial of a Turkish banker whom he allegedly worked with to help Iran launder money.

President Erdogan has denied that Turkey breached US sanctions on Iran.

Just days before that row, Turkey denied reports that former White House aide Michael Flynn was part of a plot to help forcibly remove Mr Gulen to Turkey in exchange for millions of dollars as "ludicrous".

In October, Washington and Ankara were involved in a consular row, mutually scaling back visa services.

To many Turkey-watchers, it smacks of outlandish conspiracy theories. But polls show a majority of Turks firmly believe that the CIA was involved in the failed coup.

And Graham Fuller is the latest in a string of foreigners that the Turkish authorities have linked to the alleged plot.

They claim Mr Fuller helped plan the attempted overthrow while in Istanbul, along with another American academic, Henri Barkey – allegations supported by an infamous pro-Kremlin Russian philosopher.

Needless to say, Mr Fuller and Mr Barkey have called the claims ludicrous.

But another factor is almost certainly at play: the trial in the US of a Turkish banker and a gold-trader on charges of sanctions-busting with Iran.

Both men are extremely close to President Erdogan, who has slammed the case as a plot against Turkey.

Amidst a frenzy of claim and counter-claim, the Turkish government could well be playing legal tit-for-tat, its supporters buying the argument that a giant Western-led conspiracy against Turkey is slowly being unearthed.