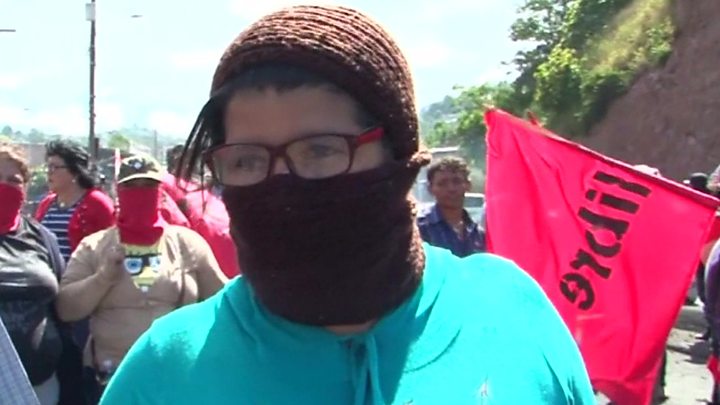 Earlier, the publication of election results was delayed when the main opposition candidate demanded more than 5,000 ballot boxes be recounted.

Salvador Nasralla says he has evidence of electoral fraud.

Violent demonstrations since the election have left one person dead and 20 injured.

Riot police fired tear gas at angry opposition supporters in the capital Tegucigalpa on Friday, near the centre where the results were due to be announced.

"The suspension of constitutional guarantees was approved so that the armed forces and the national police can contain this wave of violence that has engulfed the country," Mr Diaz said on national television.

After a day of street protests that spilled over into violence, a senior government official confirmed on Honduran TV that certain constitutional powers were being suspended and a curfew would be in place.

It came after what was supposed to be the announcement of the official result of the presidential election. Instead, the opposition alliance that is crying foul – alleging fraud by the electoral authorities – boycotted a hand count of around 1,000 ballot boxes.

They are demanding a full recount in three disputed regions, amounting to more like 5,000 boxes.

Supporters of main opposition candidate Salvador Nasralla say they have evidence of vote tampering and are refusing to end their protests until the electoral court listens to their demands.

Meanwhile, the sitting President, Juan Orlando Hernández, has a narrow lead and his centre-right National Party is confident of eventually sealing his re-election.

At this stage, neither side looks willing to work with the other and an already volatile situation in Honduras is now in serious danger of running out of control.

At the beginning of the week Mr Nasralla, whose supporters are deeply suspicious of the tribunal that counts the ballots, had established a lead of five percentage points.

But with more than 90% of ballots reportedly counted, incumbent President Juan Orlando Hernández moved ahead of his rival.

Mr Nasralla accused the authorities of manipulating the results.

Tensions eased temporarily on Wednesday when both candidates signed a document vowing to respect the final result after every disputed vote had been scrutinised.

But another pause in counting – attributed by the electoral tribunal to a computer glitch – led to Mr Nasralla saying a few hours later that the document "had no validity".

Distrust over the count is partly due to the fact that the tribunal is appointed by Congress, which is controlled by Mr Hernández's National Party, and partly due to the sudden reversal of Mr Nasralla's initial lead.

IcetruckDecember 2, 2017
Like story:
tweet
Man arrested in connection with missing NC girl, police believe she is dead
Egypt massacre in Sinai may point to an even more bloody IS