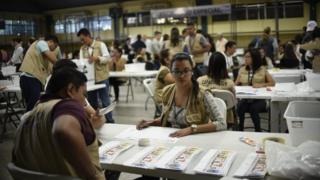 The Electoral Court in Honduras has begun a partial recount of votes cast in the disputed presidential ballot.

It was requested by the opposition coalition after initial results showed the incumbent, Juan Orlando Hernandez, winning by a few thousand votes.

But the opposition is boycotting the process because the tribunal is only examining around 6% of the vote.

They had demanded it include thousands more polling stations.

International observers have called on both sides to attend the recount amid concerns that there could be more violence.

A night-time curfew is in place after days of opposition-led protests in which at least three people have died and hundreds have been arrested.

Thousands of Hondurans marched again on Sunday in cities across the country to show their support for the opposition candidate, Salvador Nasralla.

The former TV presenter has accused his rival of manipulating the results.

US officials and the head of the Organisation of American States have called for Hondurans to refrain from violence and let the election officials carry out the recount.