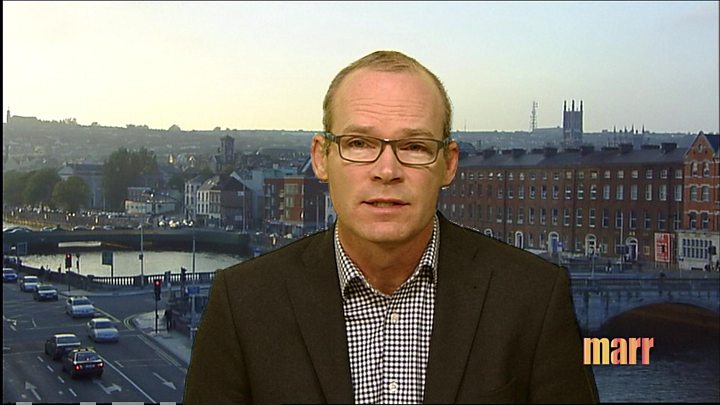 Ireland has 'no desire' to delay Brexit – deputy PM

Ireland's deputy prime minister has said his country has "no desire" to delay the UK's Brexit talks.

But Simon Coveney also warned that not enough progress had been made on the border with Northern Ireland.

While Ireland was not looking for "full detail", it was seeking the parameters within which a solution could be found.

His comments came ahead of a week of crucial decisions on whether the UK and EU would move ahead to the next phase of Brexit negotiations.

UK Prime Minister Theresa May is due to meet European Commission President Jean-Claude Juncker on Monday to assess whether sufficient progress has been made on three core issues of citizens' rights, the "divorce bill" and the future of the Irish border with Northern Ireland.

The 27 other member states will then meet on Wednesday to make a decision on going to a second phase of talks.

What does Ireland say about the border?

Mr Coveney has been heavily involved with Ireland's stance on Brexit since becoming the foreign minister during the summer.

He was also appointed as tánaiste – deputy prime minister – following the resignation of his colleague, Frances Fitzgerald, over a political row that threatened to bring down the government.

Speaking on the BBC's Andrew Marr Show, he said Ireland did not want to exercise its veto on the issue.

"There is no desire, I can tell you, in Ireland, to delay this process," he said.

"But at the same time, we have a responsibility as a government to represent the interests on the island of Ireland.

"We believe that, as an island, Ireland is uniquely vulnerable and exposed to a potential bad outcome from Brexit.

"That is why we are looking for more progress than we have."

He also denied suggestions, made by some UK politicians, that the issue was being used to pave the way for Irish unity. "That's simply not true," he said, adding that the government had maintained a consistent position for months.

He said he was very keen to avoid "a green versus orange debate" between unionism and nationalism. "Instead we're trying to protect the status quo."

"We cannot allow some kind of collateral damage or unintended consequence of Brexit to have the recreation of a border."

DUP deputy leader Nigel Dodds told the BBC there had been a much more aggressive stance on Brexit from the Irish government since Prime Minister Leo Varadkar and Simon Coveney had taken office.

He argued they wanted to dismiss technological solutions, which would prevent a hard border in Northern Ireland.

"They say none of that is acceptable. It has to be a political solution which involves the UK staying inside the single market or the customs union, or failing that Northern Ireland doing so," he added.

Meanwhile, former UK prime minister Tony Blair told the BBC that a hard border would "obviously" cause tensions that could put the Good Friday Agreement – a landmark in the Northern Ireland peace process – at risk.

Why is the May-Juncker meeting significant?

Mrs May's scheduled lunch with the head of the European Commission is widely seen as her chance to persuade the EU to move negotiations forward.

Along with the Irish border, other issues that the EU says must be agreed are the size of the UK's payment to the EU – the so-called divorce bill – and the status of EU nationals living in the UK.

Mr Juncker will also meet European lawmakers before his lunch with Mrs May, possibly to discuss the UK's offer on citizens' rights.

Progress on the "divorce bill" was made last week when it emerged that the UK had offered the EU a sum of up €50bn (£44bn).

Some Brexit supporters have complained that the sum is too high. The Leave Means Leave campaign group on Sunday issued an open letter to Mrs May, urging her not to settle the divorce bill without a series of agreed conditions.

Donald Tusk, President of the European Council, said on Friday the EU was "fully behind" Ireland's demand for no hard border on the island.

"The Irish request is the EU's request," he said, adding that he would consult the Irish prime minister before the next stage of Brexit talks.