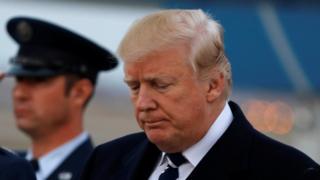 Russia-Trump: President hits out at FBI over Russia inquiry

Donald Trump lashed out at the FBI on Sunday, issuing a fresh denial that he asked former director James Comey to drop an investigation into the conduct of one of his top aides, Michael Flynn.

In a Twitter tirade, Mr Trump said the FBI's reputation was "in tatters".

His attack came amid a flurry of developments in Special Counsel Robert Mueller's inquiry into alleged Russian interference in the US election.

Mr Trump denies that his team colluded with Russia to get him elected.

Reports emerged over the weekend that Mr Mueller, a former FBI director, had dismissed an FBI officer from the investigation during the summer after he was discovered to have made anti-Trump remarks in text messages.

After years of Comey, with the phony and dishonest Clinton investigation (and more), running the FBI, its reputation is in Tatters – worst in History! But fear not, we will bring it back to greatness.

A spokesman for Mr Mueller said the officer was dismissed from the investigating team as soon as the messages were discovered.

Michael Flynn, the president's former national security adviser, announced on Friday that he was co-operating with Mr Mueller's investigation, in return for pleading guilty to a lesser charge.

The former general admitted lying to the FBI and has been offered a reduced sentence of six months. Analysts say the deal indicates that Mr Flynn has incriminating information about one or more senior members of the Trump administration.

In a series of tweets posted on Sunday morning, Mr Trump again attacked his former rival for the presidency, Hillary Clinton, who was investigated by the FBI ahead of the election after it emerged she had used a private email server to conduct state department business.

No charges were brought against Mrs Clinton or her team.

In another tweet, the president accused ABC News of "horrendously inaccurate and dishonest reporting", after one of the network's reporters acknowledged making an error in a story about the president.

Chief investigative reporter Brian Ross reported that Mr Trump was a candidate when he directed Michael Flynn to make contact with Moscow.

He later corrected his report to say Mr Trump was president-elect when he gave the order to Mr Flynn. Mr Ross has been suspended by the network for four weeks.

The president fired Mr Flynn in February for misrepresenting the nature of his contacts with Russian ambassador Sergei Kislyak to Vice-President Mike Pence.

Then-FBI director James Comey alleges that in a private meeting the day after Mr Flynn was fired, the president asked him to show leniency to the dismissed aide, saying, "I hope you can see your way clear to letting this go, to letting Flynn go."

Tweeting on Sunday, Mr Trump issued a fresh denial that he had pushed Mr Comey to drop the investigation into Mr Flynn.

Legal experts say Mr Trump could theoretically have obstructed justice if he had attempted to have the FBI investigation into Mr Flynn squashed.

The president's surprising admission in a tweet on Saturday – that he knew Mr Flynn had lied to the FBI when he fired him – contradicted his own account from the time, and may have added weight to accusations that he obstructed justice.

The revelations soured what should have been a celebratory weekend for the president, after his sweeping tax reform bill scraped through the Senate early on Saturday morning.