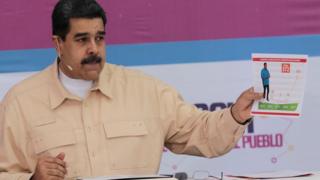 Venezuelan President Nicolas Maduro has announced the creation of a new virtual currency in a bid to ease the country's economic crisis.

He said the Petro would be backed by Venezuela's oil, gas, gold and diamond wealth.

Opposition MPs, however, poured scorn on the plan.

Venezuela's economy has been hit by falling oil revenue and the plummeting value of its existing currency, the bolivar.

President Maduro has also railed against US sanctions which he describes as a "blockade".

In a televised announcement on Sunday, Mr Maduro said the new crypto-currency would allow Venezuela "to advance in issues of monetary sovereignty, to make financial transactions and overcome the financial blockade".

"The 21st Century has arrived!" he added to cheers from supporters.

He gave no details on how, or when, the new currency would be launched.

The move follows increasing global interest in the crypto-currency Bitcoin.

A US regulator recently said it would let two traditional exchanges begin trading in Bitcoin-related financial contracts, although the digital currency continues to prove volatile.

Venezuela owes an estimated $140bn (£103bn) to foreign creditors and economists suggest Mr Maduro is looking to try to pay them with Petros as he seeks to restructure the country's debt.

Opposition MPs insisted the proposed currency would need the backing of Congress, and some doubted it would ever happen.

"It's Maduro being a clown. This has no credibility," opposition MP and economist Angel Alvarado told Reuters news agency.

Venezuela has historically relied on its oil wealth to support its economy but a decline in oil prices has sent the country into economic and political crisis.

The US and European Union have imposed sanctions, citing repressive policies by the government.

Last month, Russia agreed to restructure $3.15bn (£2.4bn) in debt owed by Venezuela. The deal allows Venezuela to make "minimal" repayments on its Russian obligations over the next six years.