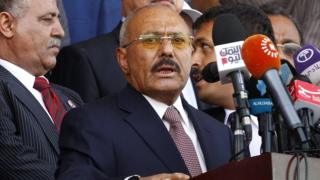 Former Yemeni President Ali Abdullah Saleh has been killed amid fighting between his supporters and their former allies, the Houthi rebel movement.

Officials from Mr Saleh's General People's Congress party said he died in an attack south of the capital, Sanaa.

The Houthis' leader hailed the news as a "great and significant occasion".

Abdul Malik al-Houthi said they had foiled a "conspiracy" by a Saudi-led coalition backing the government, to whom Mr Saleh had made peace overtures.

Meanwhile the United Nations said air strikes on Sanaa had intensified and the fighting was spreading to other governorates such as Hajjah.

The report, by the UN Office for the Coordination of Humanitarian Affairs, said roads had been blocked and tanks were on the streets. Some of the fiercest fighting was in the diplomatic area near the UN compound.

The Red Cross estimates that at least 125 people have been killed and more than 230 people injured since clashes broke out on Friday.

The UN Humanitarian Coordinator in Yemen, Jamie McGoldrick, called for a humanitarian pause on 5 December to allow civilians to leave their homes and seek assistance, and for aid workers to continue life-saving programmes.

"They don't know what's coming next… Children and young people – it's terribly sad," he told the BBC.

"And for us we're in the situation we can't help them because we're equally locked down and we have not got the ability to address their needs the way we should."

How did the rebel infighting start?

Until recently, Saleh loyalists had been fighting alongside the Houthis in a war against the current president, Abdrabbuh Mansour Hadi.

But a dispute over control of Sanaa's biggest mosque on Wednesday triggered armed clashes that have left more than 125 people dead.

On Saturday, Mr Saleh offered to "turn a new page" with the Saudi-led coalition if it stopped attacking Yemen and ended its crippling blockade of the country.

The Houthis accused him of a "coup" against "an alliance he never believed in".

How did Mr Saleh die?

By Sunday, Houthi fighters had taken control of much of the capital and fierce battles were taking place around the homes of Mr Saleh's family and their allies.

Saudi-led coalition air strikes overnight failed to stop the Houthis and on Monday morning Mr Saleh's own home was overrun. Soon afterwards, reports began to emerge that he had been killed.

A video circulated on social media showing the body of a man resembling Mr Saleh with a severe head wound. It was being carried on a blanket by armed men shouting "Praise be to God!" and "Hey Ali Affash!" – the name of Mr Saleh's clan.

Later, officials in the General People's Congress confirmed Mr Saleh's death. They said a convoy that he and other party officials were in came under fire from Houthi fighters as they fled south towards the former leader's hometown of Sanhan.

Some reports say that he was taken out of his vehicle after it was stopped by an RPG rocket and summarily killed.

What was the reaction to the news?

Houthi leader Abdul Malik al-Houthi celebrated what he called "the day of the fall of the treasonous conspiracy". He also insisted the Houthis had "no problem" with the GPC or its members.

However, an unnamed GPC official told Saudi-owned Al Arabiya TV that the Yemeni people should "take to the street and rise up against the Houthi militias".

Mr Hadi offered his condolences to the families of "honourable men" killed in the last few days in Sanaa, "most notably former President Ali Abdullah Saleh". He also called for an "uprising" against the Houthis, denouncing them as "criminal gangs".

The UN meanwhile called for a humanitarian pause in the fighting on Tuesday. It said civilians were trapped in their homes, supplies of food and fuel were running low, and that hospitals were unable to treat the wounded.

What impact will this have on the civil war?

The death of Ali Abdullah Saleh at the hands of the Houthis now makes any immediate prospect of peace even less likely.

Together, Mr Saleh's forces and the Houthis were strong enough to hold on to Sanaa and repel the forces of Yemen's internationally-recognised government and its Gulf Arab allies from much of the mountainous north.

Cracks had recently been showing in that alliance, with Mr Saleh turning his back on the Houthis and hinting at a deal with the Saudis. He appears to have paid for it with his life, meeting a similarly ignominious end as that suffered by Libya's Muammar Gaddafi in 2011.

Mr Saleh's supporters, who are well-armed, will now seek revenge, probably supported by the very Saudi air strikes that had previously been targeting them.

Why were Mr Saleh and the Houthis allies?

The Houthis, who champion Yemen's Zaidi Shia minority, fought a series of rebellions against Mr Saleh between 2004 and 2010. They also supported an uprising in 2011 that forced Mr Saleh to hand over power to his deputy, Mr Hadi.

Mr Saleh formed an alliance with the Houthis in 2014, when they seized Sanaa amid widespread disillusionment at the political transition. In early 2015, the allies ousted Mr Hadi and forced him to flee abroad, prompting the Saudi-led campaign.

The conflict and a blockade by the coalition have also left 20.7 million people in need of humanitarian aid, created the world's largest food security emergency, and led to a cholera outbreak that is thought to have killed 2,211 people since April.