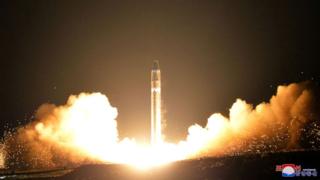 The company confirmed to the BBC that crew witnessed "what is suspected to be the re-entry" of the missile into the earth's atmosphere.

It added that as things stand no flight routes were being modified.

On 29 November North Korea tested a new intercontinental ballistic missile it said could reach anywhere in the US.

The test-launch raised tension further with South Korea and the US, who on Monday began their largest ever joint air exercise, which the North has branded an "all-out provocation".

'Blew up and fell apart'

Described by Pyongyang as its "most powerful" missile, the 29 November launch ended up in Japanese waters but flew higher than any other the North had previously tested.

According to the South China Morning Post, Cathay's general manager of operations Mark Hoey told staff in a message that "today the crew of CX893 reported, 'Be advised, we witnessed the DPRK missile blow up and fall apart near our current location'".

The launch was reportedly also witnessed by two South Korean aircraft en route to Seoul from the US.

Unlike other countries, North Korea usually does not announce its missile tests which means they come without warning or known flight path, posing a potential risk to planes.

Pyongyang does have access to international civil aviation data so it can study the airspace before any launch.

While the risk of an incident remains very low, it is something that airlines are taking into consideration. In early August, Air France expanded their no-fly zone around North Korea after it transpired one of its planes flew close to a North Korean missile path.

Monday's air exercise between the US and South Korea, called Vigilant Ace, will last for five days.

It will involve some 230 aircraft, including two dozen stealth jets, and tens of thousands of military personnel.

The North has condemned the drills, saying over the weekend that the US was "begging for nuclear war" and that it would "seriously consider" counter-measures to the exercises.