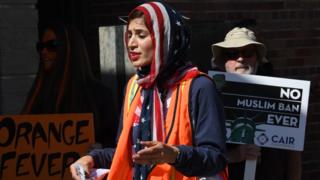 On Monday, seven of the nine justices lifted injunctions imposed by lower courts on the policy.

The ruling covers the third version of the directive that President Trump has issued since taking office.

The presidential proclamation also imposed restrictions on travellers from North Korea and some Venezuelan government officials, which have gone into effect.

In striking down the other parts, lower court judges had cited Mr Trump's campaign description of his policy as a "Muslim ban".

Further arguments will be heard this week by federal courts in San Francisco, California, and Richmond, Virginia.

In June, the Supreme Court allowed an earlier version of the policy to take partial effect.

The president's travel bans have each been frustrated by the courts to some degree: