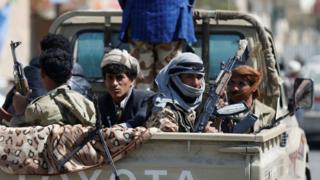 The coalition, which backs Yemen's government, reportedly hit positions near the airport and interior ministry controlled by the Houthi movement.

The Houthis meanwhile claimed they were making gains against supporters of former President Ali Abdullah Saleh.

Aid workers said the violence had left civilians trapped inside their homes.

Pro-government forces were also reported to be advancing on the city from the north-east after capturing Houthi fortifications in the Nihm area.

"The night was tough in Sanaa," Robert Mardini, Middle East regional director of the International Committee of the Red Cross (ICRC), wrote on Twitter.

The fighting on the ground was reportedly centred on the Political District, a stronghold of Mr Saleh and the location of many ministries and foreign embassies.

The night was tough in #Sanaa, #Yemen. Massive urban clashes with heavy artillery & airstrikes. #Yemenis stuck in their homes, too scared to go out. Reduced access to water, health care, food & fuel. Increased vulnerability of #Yemenis put in harm's way.

A Houthi spokesman Mohammed Abdul Salam later said its forces had been able to "cleanse the areas in which the militias of treason and betrayal were deployed".

The Reuters news agency also cited residents as saying the Houthis had blown up Mr Saleh's house in central Sanaa. His whereabouts at the time were not known.

The ICRC says more than 125 people have been killed since Wednesday night, when clashes erupted between the Houthis and Saleh loyalists following a dispute over control of the capital's biggest mosque.

The two groups have been fighting a war against forces loyal to the current President, Abdrabbuh Mansour Hadi, for two-and-a-half years. But their alliance has unravelled in recent months.

On Saturday, Mr Saleh offered to "turn a new page" with the Saudi-led coalition if it stopped attacking Yemen, ended its blockade of the country, and allowed in aid.

The coalition and Mr Hadi's government welcomed Mr Saleh's comments. But the Houthis accused him of staging a "coup" against "an alliance he never believed in".

The Houthis, who champion Yemen's Zaidi Shia minority, fought a series of rebellions against Mr Saleh between 2004 and 2010. It also supported an uprising in 2011 that forced Mr Saleh to hand over power to Mr Hadi, then his deputy.

Mr Saleh's supporters formed a surprise alliance with the Houthis in 2014, when they seized Sanaa amid widespread disillusionment at the political transition and Mr Hadi's failure to tackle corruption, unemployment and food insecurity.

In early 2015, the allies ousted Mr Hadi, forcing the president to flee initially to the second city of Aden and then to Saudi Arabia. The Saudi-led coalition responded by launching a military campaign to restore Mr Hadi's government.