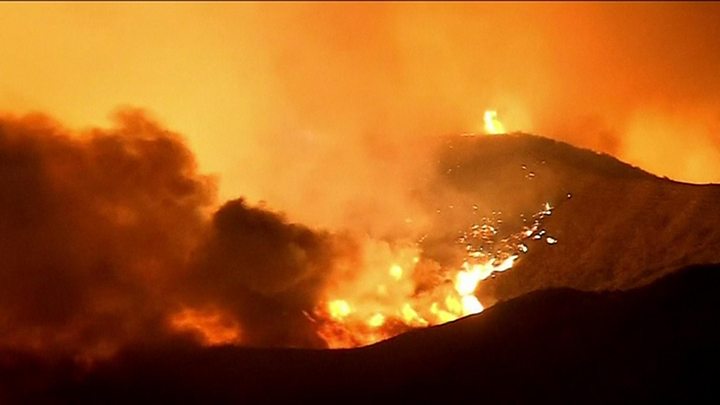 Some 27,000 residents were forced to flee their homes in the middle of the night as a fast-moving wildfire ripped through southern California.

Several thousand homes are under mandatory evacuation in the cities of Ventura and Santa Paula, some 70 miles (115 km) north of Los Angeles.

Firefighters warned the fire was moving so fast they were unable to contain it.

One person died in a traffic accident while trying to flee the fire and one firefighter was injured, officials say.

They also said 150 structures had been destroyed, and more than 260,000 people were without power.

Some 500 firefighters were working through the night to tackle the blaze, but fire chiefs admitted they were fighting a losing battle.

Residents of Santa Paula and Ventura received mandatory evacuation notices via their phones and from emergency workers going house to house.

"My son is a firefighter and I'm not going to wait around for someone to rescue me," June Byrum told CBS, saying her 91-year-old father, husband and dog had already left for a safe place.

The fire is believed to have broken out close to Thomas Aquinas College in Santa Paula at some time after 18:00 local time (02:00 GMT).

The college said that all its 350 students and staff had been evacuated.

California has been hit hard by wildfires in recent months.

At least 40 people were killed when fires ripped through parts of northern California's wine region in October. Some 10,000 structures were destroyed.

Are you in the area? Have you had to evacuate? Tell us your story at [email protected].