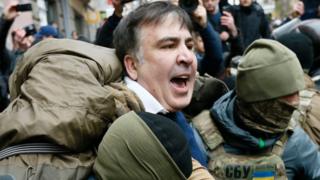 Former Georgian President Mikheil Saakashvili has been arrested in the Ukrainian capital, Kiev, accused of assisting a criminal organisation.

Masked officers dragged Mr Saakashvili from his home while supporters protested in the street.

Earlier, he addressed the crowd from the roof of the building calling on Ukrainians to drive "the thieves" away.

Mr Saakashvili has accused President Petro Poroshenko, his former ally, of failing to root out corruption.

Two days ago, he led a march in Kiev calling for the president to be impeached.

Mr Saakashvili's supporters tried to stop the police van taking him from leaving. Some of them clashed with security officers.

Mr Saakashvili, formerly Georgian, then Ukrainian, is now a stateless person, as his Ukrainian citizenship was removed by Mr Poroshenko, after a falling out. Mr Saakashvili has accused the president of blocking efforts to stop corruption.

But in September he managed to return to the country, where he faces the threat of possible extradition to Georgia, where he himself is wanted on corruption charges. He claims the accusations are politically motivated.

He served as one-time governor of the Odessa region after being appointed by Mr Poroshenko in 2015.

Before moving to Ukraine, Mr Saakashvili served for almost ten years as president of Georgia.