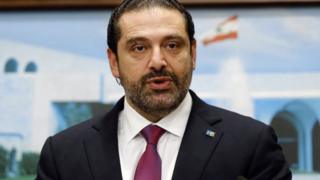 Lebanese Prime Minister Saad Hariri has officially withdrawn his resignation, a month after saying he was quitting in a shock announcement in Saudi Arabia.

He had already suspended it two weeks ago after returning to Lebanon.

In a statement, he said the situation had been resolved after all members of the government agreed to stay out of the affairs of other Arab states.

Mr Hariri had accused coalition partner Hezbollah and Iran of spreading strife across the region.

He had also said there was a plot to kill him, though he did not give any details.

Hezbollah's leader has accused its foe Saudi Arabia of forcing Mr Hariri to resign – something Riyadh and Mr Hariri have denied.

"All [the government's] political components decide to dissociate themselves from all conflicts, disputes, wars or the internal affairs of brother Arab countries, in order to preserve Lebanon's economic and political relations," Mr Hariri said in the statement reversing the resignation on Tuesday.

The concession is an apparent reference to the activities of Hezbollah, which has sent thousands of fighters to support the governments in Syria and Iraq.

The group has denied accusations of also helping rebels in Yemen and militants in Bahrain.

Mr Hariri originally announced his resignation in a televised address on 4 November from Riyadh, in which he accused Iran of sowing "discord, devastation and destruction" in the region.

His father Rafik – himself a former prime minister – was killed in a car bombing in Beirut in 2005. Several members of Hezbollah are being tried in absentia at a UN-backed tribunal in connection with the attack, though the group denies any involvement.