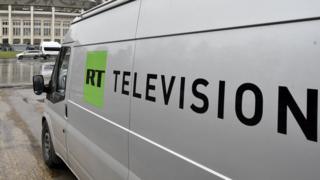 Russia has declared nine US media outlets, including Voice of America and Radio Liberty, to be foreign agents.

The new law that makes it possible for foreign media to be declared foreign agents was rushed through the Russian parliament last month.

It means the media outlets have to declare their source of funding.

The move is in retaliation for the US justice department ordering the Russian channels RT and Sputnik to register as foreign agents there.

US intelligence agencies have accused RT of being involved in a campaign of Russian interference in last year's US presidential election.

The broadcaster denies the claim.

By law, the nine media organisations listed by the Russian justice ministry will have to brand their output as the work of "foreign agents" – and disclose their source of funding.

Voice of America and Radio Free Europe/Radio Liberty are funded by the US government. Seven other media outlets affiliated to them will also have to label themselves foreign agents.

It was a response to the US branch of Kremlin-funded broadcaster RT being required to register in America as a foreign agent. Russia's lower house of parliament, the Duma, has also indicated it will bar several US media organisations from accessing parliament.

The list of nine media outlets includes websites, radio and television stations run by the two US government-funded broadcasters which target the North Caucasus and Crimea.

Some of their broadcasts are in the Tatar and Bashkir languages.

IcetruckDecember 5, 2017
Like story:
tweet
May under pressure over Irish border
Ireland to start collecting $15 billion in tax from Apple