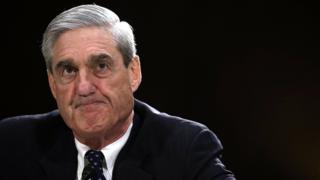 US special counsel Robert Mueller has ordered Germany's Deutsche Bank to provide records of accounts held by Donald Trump, according to reports.

Mr Mueller issued a subpoena to the bank several weeks ago demanding the transaction data, Reuters news agency and a German newspaper say.

He is investigating alleged collusion between the Trump presidential campaign and Russia.

However, a lawyer for the US president denied the reports.

"We have confirmed that the news reports that the special counsel had subpoenaed financial records relating to the president are false," attorney Jay Sekulow told Reuters in a statement.

"No subpoena has been issued or received. We have confirmed this with the bank and other sources."

US investigators are said to be demanding information on dealings linked to Mr Trump as part of an investigation into alleged Russian influence in the US presidential election, according to Handelsblatt and Reuters.

Deutsche Bank, one of the Trump Organization's major lenders on its real estate projects, said it would not comment on any of its individual clients.

However in a statement to NBC News, it said: "[Our bank] takes its legal obligations seriously and remains committed to co-operating with authorised investigations into this matter."

In June, Germany's largest bank rejected requests for account records by Democrats in the US House of Representatives to provide details of the president's finances, citing privacy laws.

While the charges are serious, the president himself has been removed from the most heated prosecutorial action.

That all changes if the Deutsche Bank reports are true. The German institution, which also has ties to Russian oligarchs, was a lifeline for the Trump Organization's businesses in the early 2000s, when US lenders turned their backs on the then-struggling business tycoon.

How closely did Mr Trump and his associates follow the letter of the law at a time before he was a serious political candidate?

The president's defenders will argue that his past business dealings are not relevant to the special counsel inquiry, tasked with probing possible ties between the Trump campaign and Russia during the 2016 presidential election.

A high-stakes showdown over whether Mr Mueller is exceeding his mandate could be brewing.

What power does Mueller have?

As special counsel Mr Mueller, who headed the FBI for more than a decade, has the powers to subpoena records and bring criminal charges.

He can also prosecute anyone who interferes in his investigation through crimes including perjury, obstruction of justice, destruction of evidence and intimidation of witnesses.

Mr Mueller's office has so far spent about $3.2m (£2.4m) on attorneys, special agents and other expenses as part of its investigation, the US Department of Justice revealed in a report on Tuesday.

US intelligence agencies have concluded that Moscow tried to sway the presidential election in favour of Mr Trump.

It is alleged that Russian hackers stole information linked to the campaign of his rival Hillary Clinton and passed it to Wikileaks so it could be released to undermine her.

Mr Trump has repeatedly denied any collusion with Russia, calling the allegations a "witch hunt".

Who has been charged?

Four people have so far been charged by Mr Mueller over alleged links between Moscow and the Trump team.

Read more: Who's who in the drama to end all dramas?